On the verge of a society where people and drones coexist: The forefront and future outlook of drones 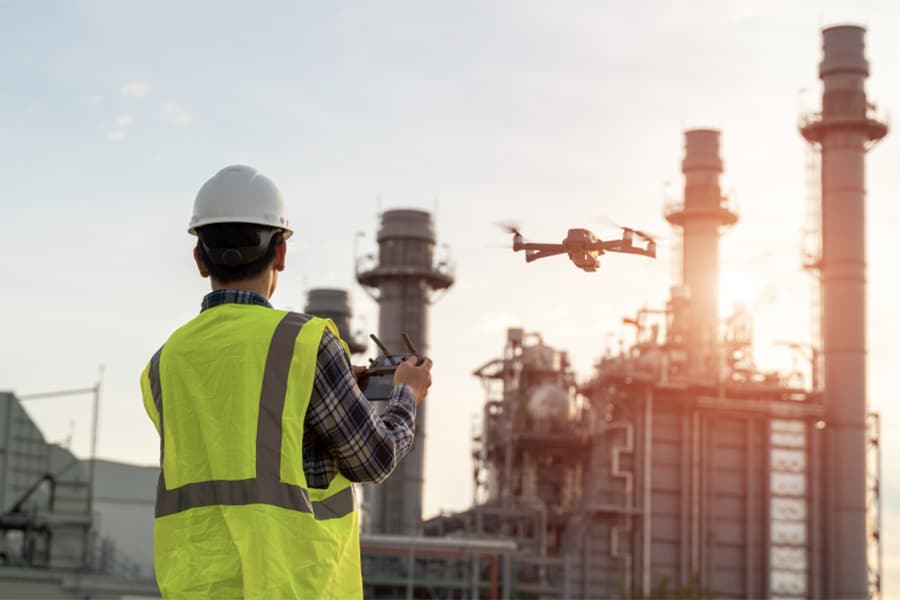 Examples of drone usage and commentary on future outlook

In Japan, at a time when the falling birthrate and the aging population give rise to the major social challenge of a shrinking workforce, unmanned aircraft known as drones are garnering attention as key to solving this problem. Flying either by remote or automatic control, drones are expected to play active roles in various industrial fields as a way to improve operation efficiency and reduce manpower needs.

Due to legislative action, in FY2022 the ban on beyond-visual-line-of-sight flight over populated areas, i.e., Level 4 aerial autonomy, is scheduled to be lifted. In this article, Masashi Fujita, who is involved in Hitachi. Ltd.'s drone business, answers questions about how such drones are currently being used and how this will change going forward. 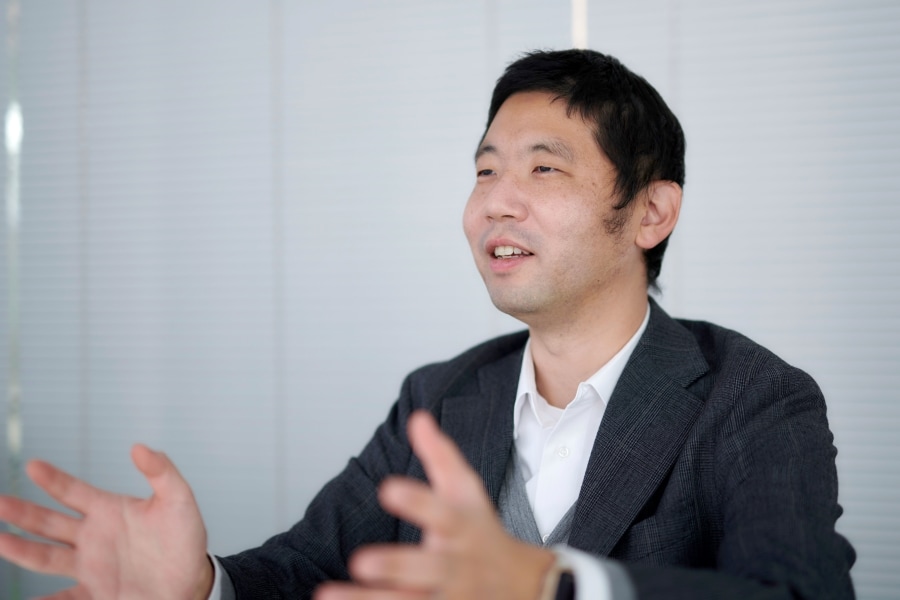 --Please tell us about Hitachi’s involvement with drones up until now. What prompted them to enter the drone business in the first place?

Fujita: Hitachi started the unmanned aircraft business for the defense sector in 2005. The word "drone" was not generally used at the time. Instead, they were mostly called "UAVs," or "Unmanned Aerial Vehicles." It was not until the 2010s that drones received serious attention from the world. Since then, high-performance drones have become available at a relatively cheap price.

In response to this trend, in 2012, Hitachi also entered the private drone business. We have been working on a number of demonstration tests in cooperation with various businesses with a view toward creating a future society in which people and drones coexist. At the same time, since 2017 we have been participating in a project for developing Unmanned Aerial System Traffic Management that is led by the New Energy and Industrial Technology Development Organization (NEDO).

--What are the "Unmanned Aerial System Traffic Management" being referred to here?

Fujita: This is a common platform for supporting the safe operation of drones. I just mentioned a future society in which people and drones coexist, but when we achieve that, can you imagine the number of drones that will be flitting about in the skies above Japan? The Japan Aerospace Exploration Agency (JAXA) estimates that there will be as many as 19,000 flights per day and an average of 275 drones flying in a 5 by 10 kilometer area at one time.

Unmanned Aerial System Traffic Management provides support that enables the flight safety of such a huge number of drones. Specifically, it has three functions. One is “Flight Plan Management” for coordinating flight plans within the target airspace. Second is “Dynamic Management” for preventing the risk of collisions between “drone and drone” or “drone and manned aircraft”. The third is “Performance Management”, which records flight performance and improves navigation quality.

--You are taking the initiative in development with a view toward drone coexistence.

Fujita: Indeed we are. On the other hand, formulating rules and making adjustments to legislation for drone operation will also become critical to the effectiveness of Unmanned Aerial System Traffic Management. It was with such a perspective that we also participated in the establishment of the Japan Unmanned System Traffic & Radio Management Consortium (JUTM), an organization that conducts such work as the development of environments for the safe operation of unmanned aircraft, and we recommend policies for the social implementation of drones.

--How are drones being used worldwide?

Fujita: In countries like the U.S., China, and Europe, there are many cases of drones being used in agriculture and infrastructure inspection. In African countries, where existing transportation infrastructure is underdeveloped, there are examples of drones being employed in such tasks as the transport of medical supplies. In Japan, also, industry-government-academia initiatives are underway to expand drone applications.

--In this situation, what drone solutions are Hitachi providing?

Fujita: First is surveying and measurement. In December 2021, we launched a cloud service for steel manufacturers and electric power companies that supports stockpile management through the use of drones in surveying and measuring the raw materials piled up in their stockyards.

Until now, stockpile management could only be done by experienced workers who visually estimated stockpiles at the site, a process that required an enormous amount of man-hours. Even with the introduction of 3D survey software, workers still had to proceed to the site for such survey work. Organizing the data also took time, and this undertaking did not result in any significant reduction in man-hours. 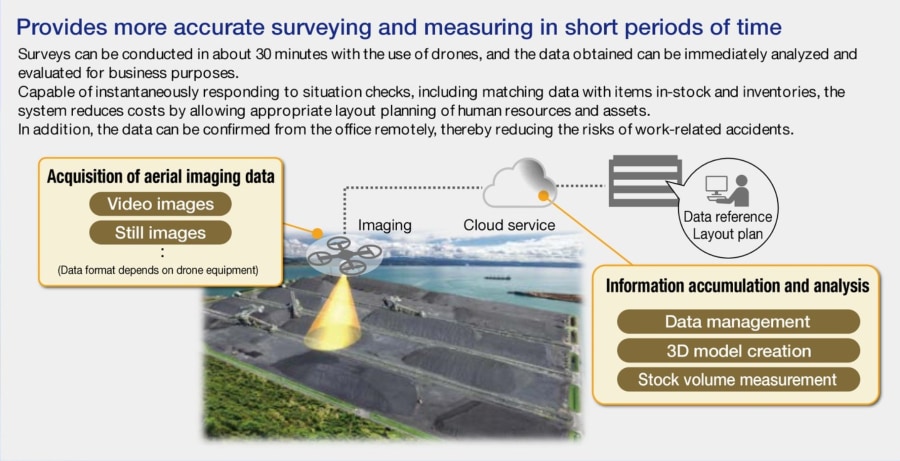 A cloud service that supports stockpile management using drones has been put into practical.

The Hitachi Stockpile Management System is a cloud service for raw materials stockyards that aims to solve such challenges. This system uses AI image recognition technology to analyze and visualize aerial images photographed by the drone, and it automatically measures stockpile’s shape information, such as stock volumes per pile and empty space.

This process makes it possible to shrink work that required about 100 minutes using conventional 3D survey software all the way to 60 minutes. And because the efficient ascertainment of information of stockpiles also leads to the optimization of raw materials transport, you can expect further cuts in cost.

Infrastructure inspection and logistics also benefit from use

--So this is a single package that offers not only measurement by drone but that also handles everything up to image analysis and the updating of information on stockpiles. What other fields are you working on for drone use?

In addition, the ability to create 3D models from drone-captured image data and to use this to identify areas of potential damage leads to the improved efficiency of inspection work. I feel that as various infrastructure ages, in the future drone use will be essential to achieving inspection work with the minimum number of people.

Although still in the demonstration phase, we are also considering drone use in the field of logistics. In the future, drones will likely take on the transportation of goods to mountainous regions, depopulated areas, and other places that are difficult to cover using existing ground transportation networks. 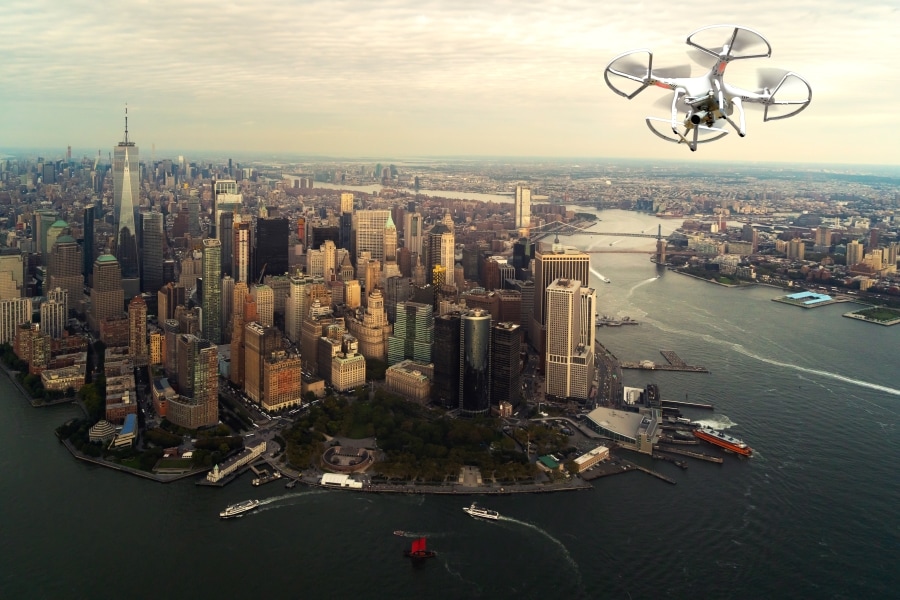 --What are some specific challenges to drone use?

Fujita: The first is the performance of the drone itself. At present, drones with flight performance that would enable them to stably transport a heavy payload of goods over long distances exceeding 10 kilometers round-trip have not yet become widespread in the market.

We are directing our expectations to the next-generation drone development being carried out by domestic manufacturers for performance improvements in this area. Hitachi has no plans to manufacture drones, but we do hope to support the achievement of long-distance, beyond-visual-line-of-sight flight in such ways as by providing Unmanned Aerial System Traffic Management.

--Besides performance, what other challenges exist in promoting drone use?

Fujita: Legislative action related to drone operation is also important in the promotion of disseminating drone use in Japan. No matter how high performance the drone, there is no 100% guarantee that it will not crash, making it extremely difficult to establish flight rules for populated areas.

Up to now, Japan and its industry has seen industry, government, and academia working together to formulate rules through consortiums and other initiatives. These efforts have resulted in the decision by the Cabinet for the partial revision of Japan’s Civil Aeronautics Act in order to enable beyond-visual-line-of-sight flight over populated areas, or Level 4 autonomy, by the end of 2022.

--What kinds of changes will there be due to the revisions to the Civil Aeronautics Act?

Fujita: Starting in June 2022, all unmanned aircraft weighing over 100 grams will be required to apply for registration. This system will be similar to car license plates in that each drone will be assigned an ID.

However, in the case of drones that fly through the air, mounting a license plate would not work because people would not be able to see it. Instead, it will be required to mount a special device called a "remote ID," which allows for ID verification from remote distances. This will make it possible to identify owners in case of an accident.

In addition, in the future it is expected that a new drone operation license system will be established and that beyond-visual-line-of-sight flight over populated areas, or Level-4 autonomy, will require First-class Qualification. Besides this, it will be necessary to keep an eye on legal systems related to drones, such as aircraft certification, etc.

--Do these legal revisions mean that it will become a matter of course for drones to be flying over our heads after 2022?

Fujita: I don't think that will happen right away. I expect first of all that the ban on Level 4 will be lifted under restricted conditions. Meanwhile, it is said that flying cars will be ready for practical use at the Expo 2025 Osaka, Kansai. I hope that drones too will be a familiar sight by then.

Future outlook for the drone business 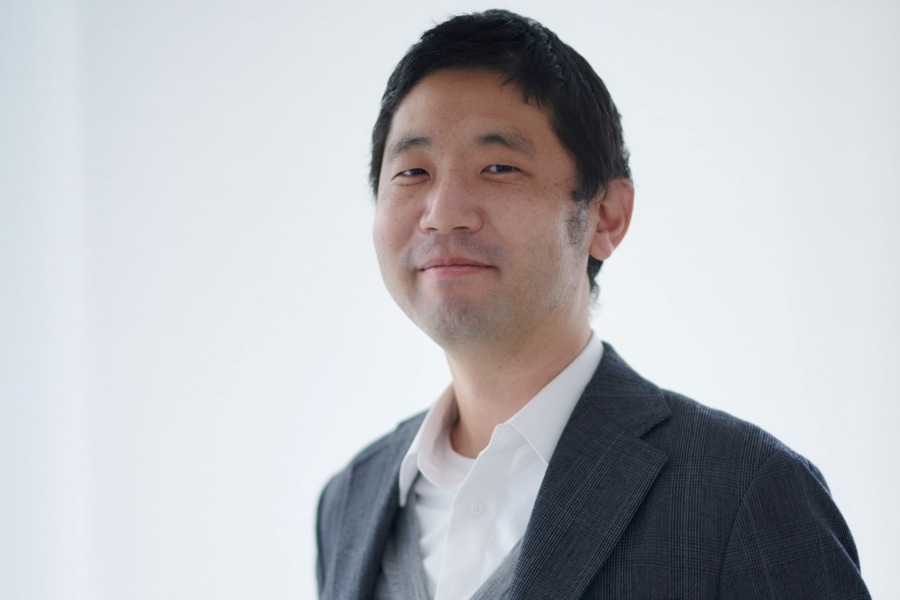 --What is outlook for Hitachi's drone business?

Fujita: In addition to surveying and measurement, infrastructure inspection, and logistics, I would like to focus on the disaster field. Disasters can sometimes bring about damage so extensive that it changes the topography of the land -- the landslide in Atami in 2021 being just such an example. When this happens, the initial response will inevitably be delayed by using just existing maps.

We are therefore developing a solution that employs aerial images taken by drones to update maps of disaster areas in real time. We would like to create a system for speedily ascertaining the overall disaster situation that will let us support the early restoration of stricken areas.

In the longer term, we will promote the use of drones in an even-broader range of industrial fields. I would like to pursue drone potential in delivering solutions to the multiple and diverse challenges faced by customers. This should also lead to solutions for the shrinking workforce and other social challenges. We will continue to actively deploy our business with the aim of realizing a future society in which people and drones coexist.