Hitachi technology demonstration at Tokyo Dome
for infection-prevention measures:
Visualization of congestion inside the stadium

On November 7 and 8, Hitachi, Ltd. took part in a demonstration of a technology that ascertains congestion conditions inside a baseball stadium while taking into account visitors’ privacy. The demonstration took place at Tokyo Dome, during a regular-season professional baseball game, as a measure against COVID-19 infection.

Another feature of the technology is its ability to automatically recognize in motion or stationary people and to distinguish them with different colors, making it possible to intuitively ascertain areas of crowd buildup. The video data obtained during the demonstration will be used for in-stadium congestion relief, for considerations on crowd guidance measures, and for infection control at future sports and other events.

According to Ms. Ai Fuchigami of the Social Infrastructure Information Systems Division, Hitachi, Ltd. and who participated in the demonstration, said, "This is the first time that this technology has been used at a sports event. Because it enables conditions at target sites to be ascertained visually in a way that takes privacy well into account, we expect it to be used in COVID-19 infection control." 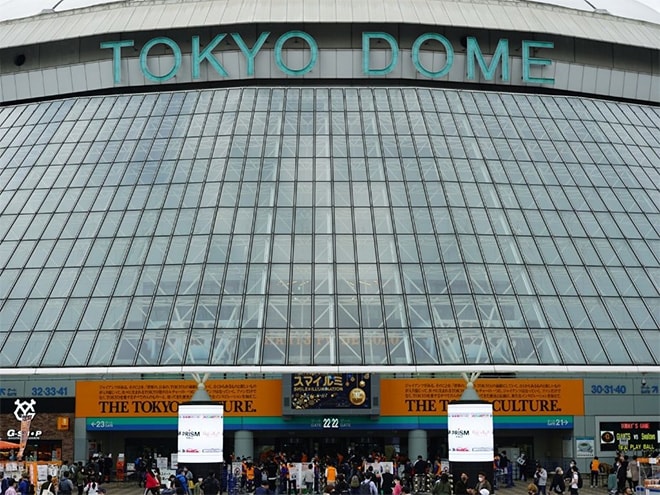 The Human-Flow Visualization combines Hitachi's proprietary people-flow measurement technology and image-processing technology. The number of people, their locations, their speed and direction of movement are detected from the video captured by a camera. These information are then displayed in the form of human-shaped icons, making it possible to ascertain congestion conditions in real time while accommodating privacy concerns. This system has already been introduced into services that transmit congestion conditions at train stations to users’ smartphones.

During the demonstration, video data was collected from 10 of the 102 cameras installed inside the Tokyo Dome. The human-shaped icons that appeared in the images were displayed in yellow if stationary and blue if in motion. This made it possible to intuitively ascertain crowd buildups and people flow inside the stadium. Analysis of the accumulated video data can be applied to measures for relieving congestion, such as by increasing the number of guides in areas where congestions often occur. 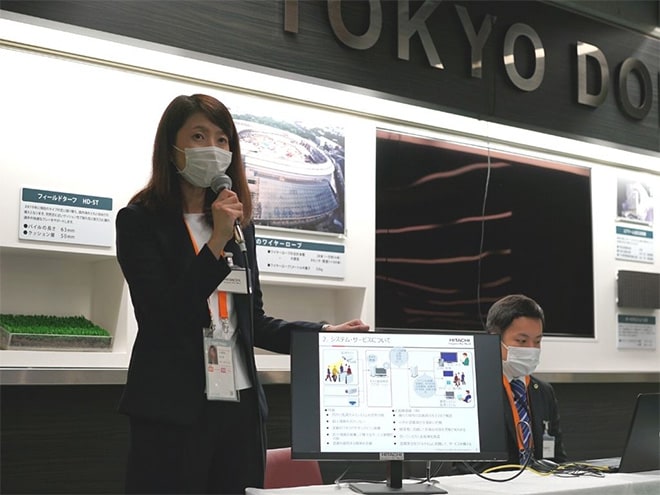 Having received approval from the Subcommittee on Novel Coronavirus Disease Control, organized by the Cabinet Secretariat of Japan, the demonstration was conducted in cooperation with the Tokyo metropolitan government. Analysis results will be shared with the national and Tokyo metropolitan governments and will be applied to infection control measures at sports venues and other large-scale events.

Expressing the hope that the technology will find use in infection control measures at various public venues in addition to sports events, Ms. Ai Fuchigami spoke as follows:

"This solution can be introduced anywhere where cameras are installed. So, besides sports events, it can therefore be used at all kinds of places where congestion can be expected, such as at commercial facilities and various types of event venues. By using this technology to visualize congestion, we hope to support the ability to operate events and facilities in a way that offers safety and a sense of relief during this COVID-19 pandemic."