As COVID-19 plays havoc around the world, action has become necessary to prevent the spread of infection. In Japan, scrupulous hand-washing, gargling, and mask-wearing, as well as avoiding the 3Cs (closed spaces, crowds, and close contact) have become everybody’s routine.

However, COVID-19 is just one among many infectious diseases that require preventative measures. Another one of these diseases is influenza, for which outbreaks generally occur during seasons with low temperature and humidity. As the possibility of simultaneous COVID-19 and influenza epidemics (a "twindemic") looms, this year, in particular, is facing concerns about strains on hospital capacity, creating an unpredictable situation.

Under these circumstances, Hitachi has developed a service that uses AI technology to forecast influenza epidemics. This technology is also expected in the future to find application in predicting COVID-19 outbreaks. We spoke about this service to its developer.

A desire to protect children from influenza To address this, Hitachi has developed its Influenza Forecasting Service, which uses AI to predict epidemics in the various wards and municipalities throughout Japan. The aim is to enable preparatory action to be taken based on advanced knowledge for which regions influenza epidemics will occur. Hitachi, Ltd.'s Takumi Tando, who was in charge of the development of this service, describes the purpose of developing the service as follows:

"Countermeasures are important in regions where epidemics of influenza and other infectious diseases are occurring or may occur in the near future. If the epidemic status of such a region can be visualized and even predicted, this can lead to behavioral modification aimed at prevention, such as vaccination and crowd avoidance, which will help in preventing infection spread. The use of AI enabled us to give shape to the idea of predicting infectious disease trends for individual regions using various types of data, including real-time case numbers."

In fact, it was a certain desire of Mr. Tando's that triggered the birth of this service. A father of three children, he said that his arrival at the idea for this service arose out of his wanting to create a mechanism that would keep his children from contracting influenza.

He says: "When they are little, children are susceptible to infectious diseases, so I wanted to reduce their suffering. Moreover, for dual-income households, if their child comes down with something, one of the parents will have to take time off from work. I came up with the idea of this service as a way to solve this challenge. It was born from the consciousness of their own issues - not because there is a new market." 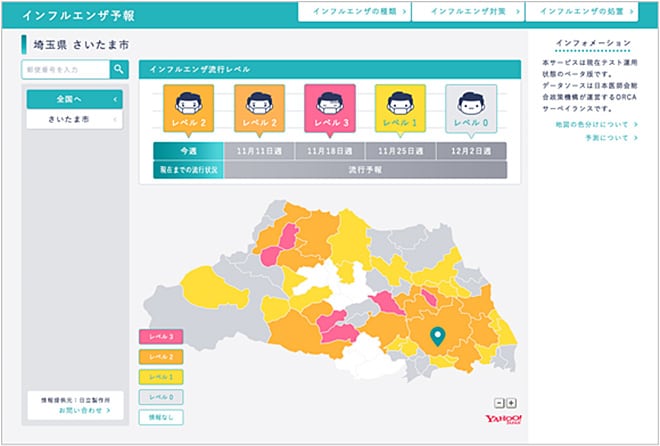 Although this marked the first step in the development of the Influenza Forecasting Service, the journey was not a smooth one. Instead, starting with existing technology, development began as a stab in the dark, as neither development partners nor customers had yet been envisioned. Mr. Tando first wrote down the issue that he wanted to solve and his idea, and with this proposal in hand, he searched inside the company for people that might want to get on board to form a project team. He explains this as follows:

"Given the limited development period, we needed to structure the team so that it can promote speedy development. For this reason, we obtained the cooperation of venture businesses and other outside entities in repeating the cycle of production and improvement. We were always conscious of creating a service that was easy to use and readily understandable by anyone who viewed it. Specifically, this meant extensive considerations on configuring an interface that users could grasp intuitively. We adopted such strategies as categorizing the degree of an epidemic into four levels to be displayed as face icons that even children could understand. And, as there may be some people who react negatively to infectious disease information, we took measures to prevent the design from becoming too frightening or attentive."

Through this process of trial and error, the project team went on to complete the service. The next step was to partner with Saitama City for demonstration testing to be conducted so as to discover user responses and needs. According to Mr. Tando, the project team continued with development right up to demonstration testing, verifying correct system operation just a few days before the start.

In addition, the team worked continuously on time-consuming tasks such as setting up a call center for handling user inquiries and providing user notifications. As a result of teamwork into the final hours, the demonstration test was able to start on schedule.

Response to the demonstration test 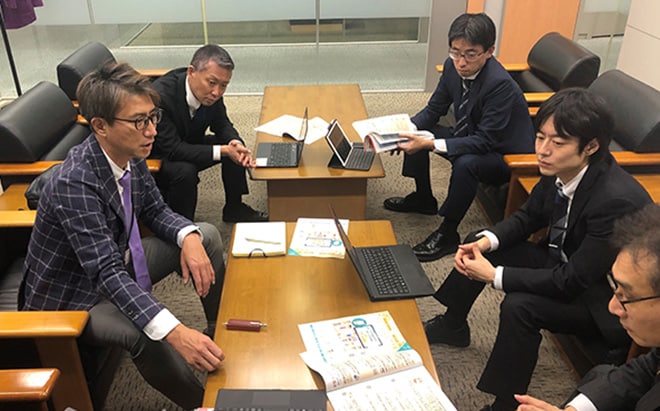 The demonstration test was conducted from December 2019 until March 2020. Saitama City, where testing was conducted, is known for its pioneering efforts at using advanced technologies and knowledge, such as AI and IoT, ahead of other municipalities. Reflecting on the reason for participating in the demonstration test, Mr. Nobuyuki Ariyama of Saitama City, commented as follows.

"We have been pursuing initiatives for raising the quality of life of city residents using constantly evolving digital technologies. At the same time, we felt that the development of a ‘digital divide,’ brought about by the increasing sophistication of technology, was becoming an issue. In this respect, this project's influenza forecasting is a simple and easy-to-understand service that anyone can use, so we participated based on the idea that it would be a useful service that would lead to safety and confidence for all our residents."

As it turned out, he was impressed with the positive response from city residents that used the service during the demonstration testing. He received feedbacks that showed the service indeed met the residents’ needs for easiness and clarity, and that they would want to use it again.

He states that, "We linked the service to the LINE communication app. The number of registrants came to about 6,800 people, and this gave us a direct feel for the high interest of city residents. Users also rated the service particularly high: over 70% answered on a questionnaire that they would want to use it again. The reality is that every year many people contract influenza, so we hope that this service will at the very least make a dent in the number of city residents who contract it and other infectious diseases."

One factor behind this favorable feedback from users is the high prediction accuracy of the service. Compared to a typical year, the influenza outbreak during the period of demonstration testing ended early. Nevertheless, analysis by AI of various types of data in addition to influenza case numbers provided by over 4,000 medical institutions nationwide made more-advanced predictive abilities possible, therefore yielding an accurate prediction of the influenza epidemic.

As Mr.Tando adds, "In a typical year, January tends to be the month with the most outbreaks of influenza. Initially, those were the results we expected AI to deliver. Instead, it predicted a peak during the final week of December and a decline in cases in January. Project members doubted this and wondered about the validity of the system. However, it ended up that the AI prediction was spot on. The demonstration testing gave us first-hand experience of its prediction accuracy."

Applying the service to all types of infectious disease

In response to the success of the demonstration testing and user feedback, it was decided to make the Influenza Forecasting Service commercially available starting in October 2020. Mr. Tando hopes to reduce the number of people suffering from infectious disease by having as many people as possible use this service.

"In Japan, it is reported that about 10 million people contract influenza annually. Not only do infections interfere with daily life, but they also have quite an impact on economic activity. I believe that the use of this service will let us propose to the world a new lifestyle comprising the prevention of infectious disease based on epidemic prediction. Ultimately, I hope to create a world in which no one suffers from infectious diseases."

He goes on to say that the Influenza Forecasting Service can be applied to the prevention of the spread of COVID-19 cases.

"If we can accumulate information and factors that are potentially affecting the number of cases and infections in the world, I believe it would be possible to apply the epidemic prediction mechanism itself to other infectious diseases. We are proceeding with development with a view toward application to emerging infectious diseases such as COVID-19. Infectious diseases will continue to be a human issue, and we are working to address such social issue with the intention of leveraging this prediction mechanism as a part of our information infrastructure for living a safe and secure life."

The Influenza Forecasting Service was born from a father's desire. In the future, starting with COVID-19, it will be applied to forecast services for all types of infectious diseases. Mr. Tando and his team will continue working to find solutions to such social issues. 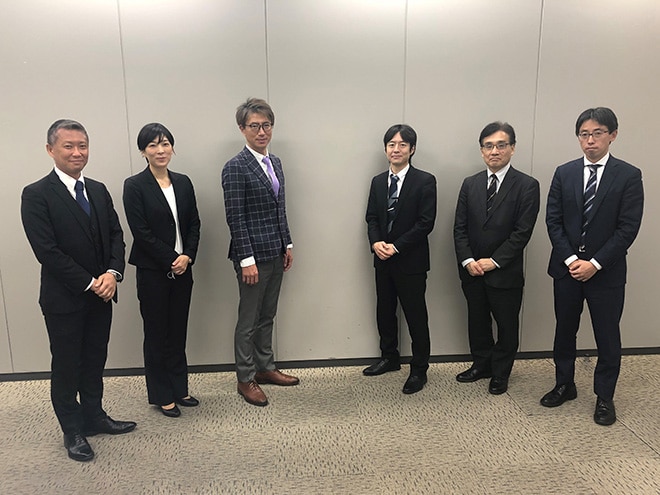 Project team members who participated in the demonstration testing