The People of Hitachi: Developing Simulation Software to Free Society from Floods

The People of Hitachi: Developing Simulation Software to Free Society from Floods

Due to the impact of climate change, the large-scale flood damage caused by heavy rain is increasing. Inundation from rivers plays havoc with our daily lives through impacts such as submerged roads, paralyzed transportation, and flooded houses that force residents to evacuate. Aiming to reduce such damage, Hitachi, Ltd. developed “DioVISTA,” a flood simulation software.

DioVISTA is capable of visualizing flooding situations caused by river inundation, collapsing embankments, and other such events on a 3D map. This software is being used to not only create hazard maps that enable estimations of disaster risk, but also to draw up evacuation plans and flood prevention measures.

In 2019, in recognition of the effects of its high-speed and precise simulation, the Japan Institute of Invention and Innovation granted its Invention Encouragement Award to DioVISTA, which was developed by Hitachi, Ltd.'s Satoshi Yamaguchi (age 42). We asked Satoshi about the software's development history and its prospects.

A mind-changing damage from Typhoon Tokage

Satoshi became interested in the problem of climate change during science class in junior high school. He says that he received a unique sense of accomplishment and enjoyment from the task of listening to the weather reports on the radio and quickly writing down figures on a map to create weather maps.

"Drawing up a weather map while listening to the radio gave me the feeling of a special kind of activity, one that exposed you to expert knowledge. I just got more and more enthralled."

As a high school club activity, Satoshi belonged to the natural sciences club. Every day, he continued to listen to 5:30 a.m. radio programming and drew weather maps. Following high school, his inquisitive mind took him to university, where he studied geophysics, after which he joined Hitachi, Ltd. in 2003. The first research theme assigned to him by his manager was to develop a flood simulation software. Satoshi, however, had doubts about the need for such project.

"At the time, damage from floods was trending downward, so I wondered why I should be researching such a topic. I didn't see it as a major social issue." 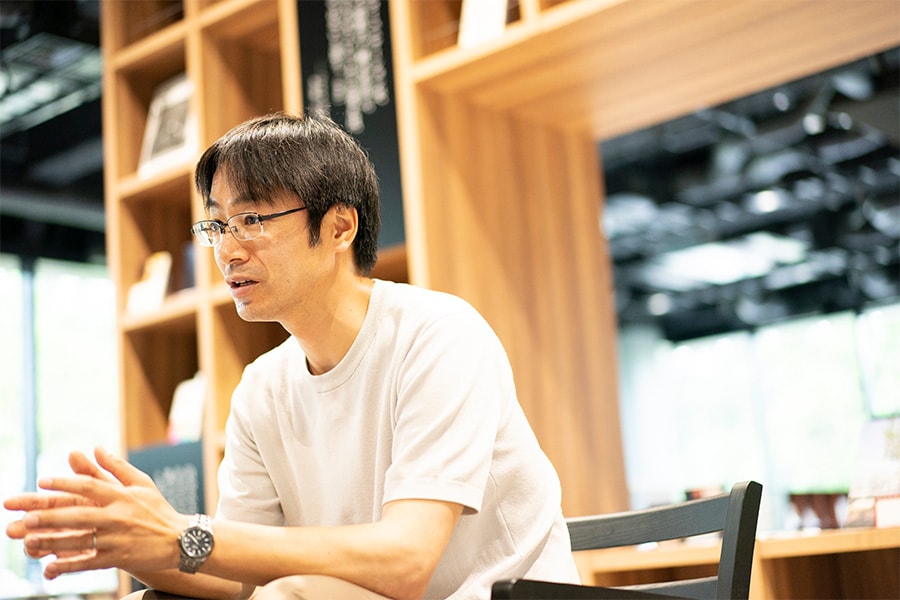 Satoshi during our interview

Then, a disaster struck that completely changed his mind—the October 2004 Typhoon Tokage. With 98 people dead or missing and more than 50,000 houses flooded, the typhoon caused extensive damage throughout Japan.

"I was shocked to see images of flooded roads and people waiting on the roofs of buses for rescue. Had this really happened in Japan? I wondered. Without a doubt, it was this disaster that reversed my thinking about the necessity of flood damage research."

This led to the full-scale start of the flood simulation software development project. Development was carried out jointly with Hitachi Power Solutions Co., Ltd., a company with extensive experience in the fields of analysis and simulation. The development team focused especially on simulation calculation speed.

"When simulating the situation of overflowing rivers, we made it so that the area to be simulated automatically expands according to how the water expands. This calculation method enabled us to restrict the area to be simulated, making it possible to calculate the data at a much greater speed than before. In recognition of the high effectiveness of this calculation method, in 2019 DioVISTA received the Invention Encouragement Award from the Japan Institute of Invention and Innovation." 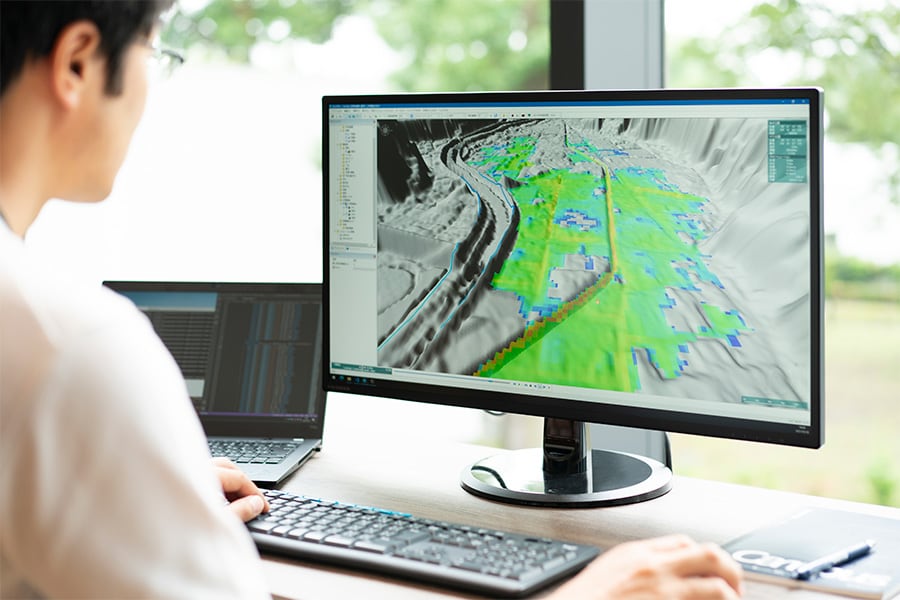 Simulating a flood on a 3D map

In addition to speed, precision is also important to flood simulation. Several questions must be answered, such as: What time is the flood expected? Where will the water flow? If there is inundation, when will it return to normal?

Speedily displaying situations that change from one moment to the next was a considerable challenge. Satoshi therefore brought together voluminous data on geographical features and water amounts, subjected the results to repeated verification, and paid many visits to the field in order to investigate whether or not the simulation results were actually correct.

"I rode a bicycle around in the field, experiencing for myself differences between low and high ground. While the area I visited looked flat, after learning from the simulation that water would be collected in a specific place, I did notice that there was a slight dent there. The work of matching reality with data was a struggle."

Flood damage research must go on 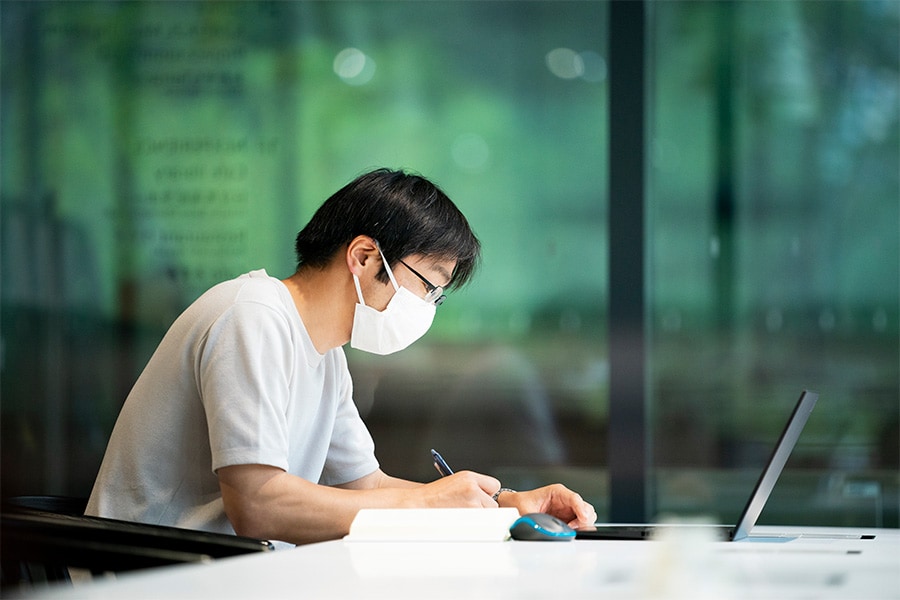 Satoshi immersing himself in his work

The flood simulation software DioVISTA was completed three years after project launch and was released in 2006. Initially, it was picked up by the media and was introduced in a variety of fields, finding use in such applications as local government hazard maps that enabled estimations of disaster risk and in the flood damage risk estimates developed by insurance companies.

However, from about 2010, orders began to decline, causing Hitachi Power Solutions, the joint developer, to comment that "At this rate, we will not be able to continue with this research." Satoshi, however, did not give up. In the elimination of flood damage, halting research at this point was not an option. In addition to his research and development duties, he took it upon himself to expand the market through new customer development and other such activities.

"Climate change response is a challenge for people living in the 21st century. I strongly felt the need to continue research on flood damage. Until now, I've been mainly involved in research and development, but it has become necessary to seriously consider such questions as who is going to use this software and how they are going to use it, what objectives should be achieved, and what functions users really want. Through trial and error, I came to the realize that we need to appeal to different customers than previously." 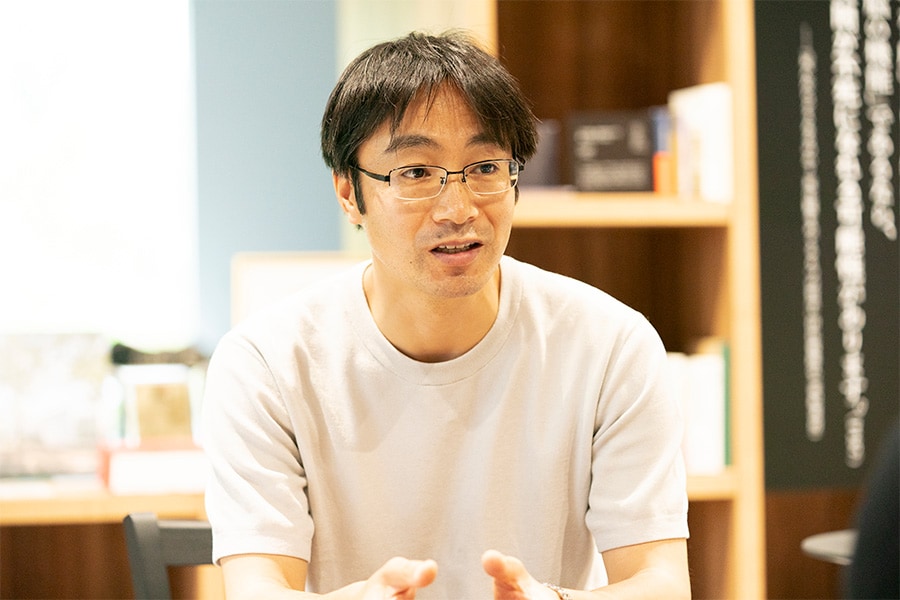 It took 4 years to expand the market

Satoshi then turned his attention to construction consultancy companies that conduct flood analysis to assess flood damage risk. He held seminars where he provided information and introduced software functions useful to the construction industry while building relationships with new customers.

He also listened to engineers that work in the field so that he could revise the software in accordance with customers’ need. He added functionality that enabled customers to enter their own data and rewrote the program to increase calculation speed. These efforts resulted in the widespread introduction of the software to the construction consultancy industry.

"Construction consultancy companies have been very satisfied with our product. They told us that the introduction of DioVISTA increased the calculation speed of their simulations and dramatically improved their work efficiency. Because this is also linked to customer profit, we have been able to achieve a steady stream of orders."

Having had its market expanded in this way, DioVISTA is on its way to utilization in all kinds of places to decrease flood damage, and it is currently being used in the disaster measures of emerging countries.

Toward a society free of suffering from floods 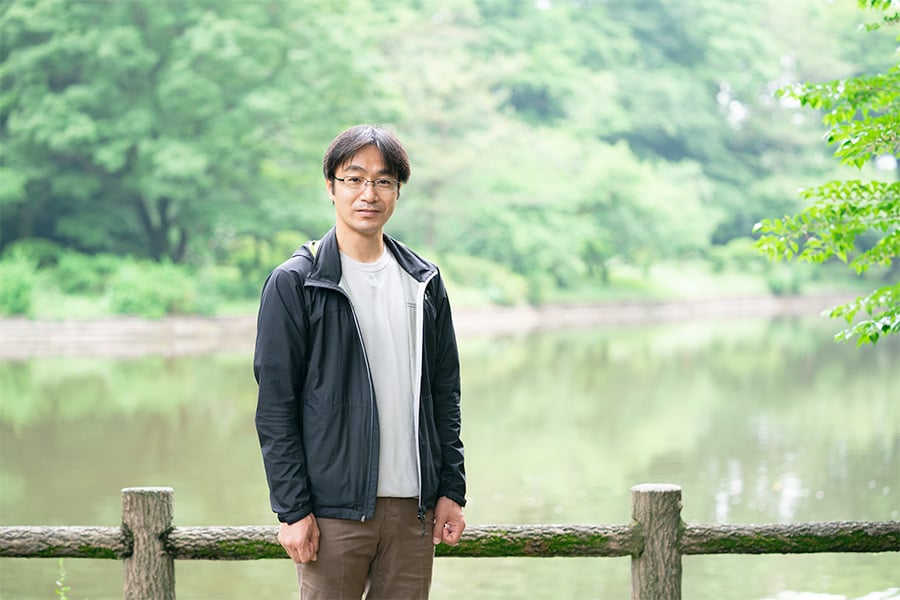 Satoshi continues his journey to protect people from flood damage

Using the knowledge gained through the development of DioVISTA, Satoshi is now working on optimizing dam operations. Dam operation plays an important role in reducing flood damage. This is accomplished by accumulating water in a reservoir behind the dam during the peaks of heavy rains.

Previously, the amounts of water to be accumulated and released by dams have been determined based on rules set by human. There are, however, cases when flood damage prevention requires discharge based on rain forecasts that are changing by the minute. Simulation software for dam operation developed by Satoshi has made this possible.

"I figured that implementing advanced technologies in dams would be useful in flood damage measures. Using software enables the efficient management of dam capacity and allows dam operation in which the dam's water level is lowered before the amount of rainfall increases, and water to be accumulated during the peak of a rainstorm. I believe that this will let us impact flood damage reduction."

Going forward, Satoshi intends to continue developing simulation software with the aim of realizing a society free of flood damage.

"My long-term goal is to realize a society where people need not suffer from flood damage. The frequency of deluges and heavy rains is likely to increase due to global warming and climate change. Although a fundamental solution might be out of reach, we can take measures in preparation for flood damage using the predictions made possible by simulation software. I feel great pleasure in knowing that our work can contribute to achieving a safer society."