The People of Hitachi: Educating ICT for Younger Generations

While the IT market continues to grow rapidly, thanks to the evolution of technology, our lives have become vastly richer. However, the Ministry of Internal Affairs and Communications of Japan forecasts that Japan will experience by 2030 a shortage of human resources in the field of information and communication technology (ICT), which may be as many as 790,000 people. This has engendered an urgent need to develop ICT human resource that can use cutting-edge technologies such as AI, IoT, and big data to create new services.

Against this backdrop, Ms. Rika Shirasaka of Hitachi Solutions Create, Ltd. carries out activities for conveying the appeal of ICT to high school students. In this article, we will take a look at Rika's recent challenge.

Events for high school students to enjoy learning about ICT

Rika joined Hitachi Solutions Create in 2012 after studying programming at university. She is currently active as a cybersecurity specialist, who oversees tasks such as maintaining security tools and analyzing malware.

However, the numbers of ICT human resource, as represented by Rika, are steadily decreasing in Japan. This has been attributed to the declining birthrate, aging society, and falling population. To address this, Rika decided to participate in the startup of an event aimed at developing future ICT human resource, and to get more young people interested in ICT.

The event that Rika became involved in is called “Singularity Battle Quest,” which is a competition for high school students to acquire skills in ICT. High school students involved in extracurricular activities related to computer, programming, robotics, etc. gather from around the country to compete in teams of three from each school.

The event comprises preliminary and final rounds. The preliminaries comprise a quiz that covers basic knowledge about ICT. The top teams that did best on the quiz then advance to the finals.

In the finals, the teams compete for total points in each of the following five fields: “Cyber Quest”, a competition testing knowledge of cybersecurity; “AI Quest”, a competition for forecasting the accuracy of AI built by each team; “Robo Quest”, a race using autonomous-driving robot cars programmed by each team; “Data Quest”, in which big data is used to accurately forecast urban population changes; and “X Quest”, where students compete based on the precision of chat bots built by each team.

A challenge in developing problems for high school students The event was first held experimentally in 2019 as the "0th Competition," In which Rika participated in its startup. Because of her specialty in the field of cybersecurity, she was put in charge of competition development and management for the Cyber Quest out of the five fields of the finals.

"Usually, I don't have many opportunities to speak directly with high school students, so I decided to participate in this event, as I thought it would open the door to increasing the number of young people interested in IT service development," says Rika.

In the Cyber Quest, teams compete on their knowledge in cybersecurity. It poses questions such as "Find the password to this PC and try to log in" or "Decrypt this ciphertext using programming." Students use their knowledge and skills using a dedicated software to find a keyword that have been hidden inside the questions to earn points.

However, in the course of devising problems for the event, Rika ran up against some obstacles. Her biggest struggle was in how to turn security problems full of specialized terms seldom encountered in daily life into something that would interest high school students.

"At first, I thought I could reuse some problems straight from an in-house security contest. However, as these problems were aimed at professional developers and engineers, they were in the form of sentences familiar to adults, such as: ‘Your subordinate has sent a password-protected ZIP file to a customer.’ It was a struggle to customize these kinds of problems so that high school students can easily understand them."

Creating problems that students can relate to 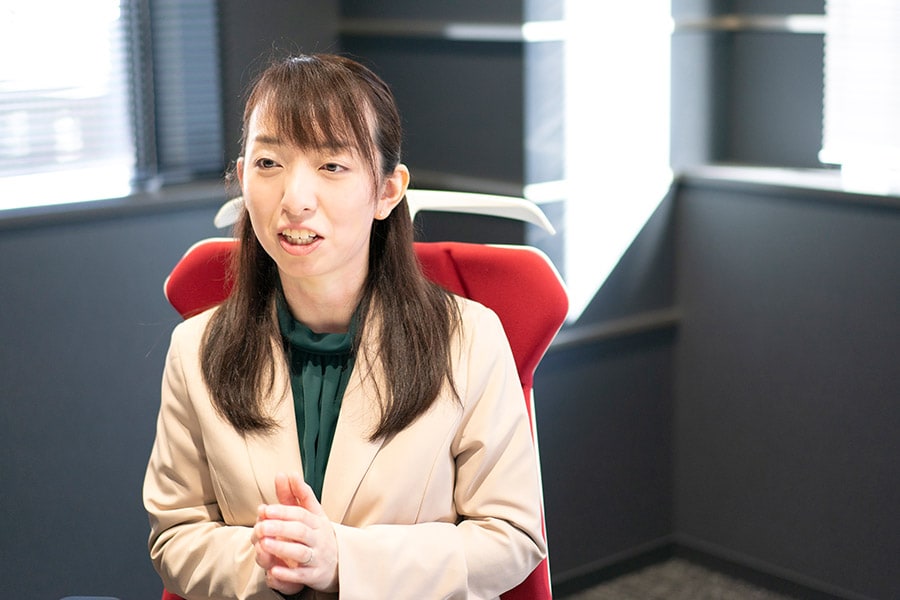 Rika looking back on the launch of the competition

The challenge lay in figuring out what kinds of problems would attract the interest of high school students in this modern age. Rika approached this by researching topics that are popular among teenagers, such as Tik Tok and Bubble Tea, and listening to what her younger brother, currently in high school, had to say.

Another consideration was the fact that keeping problems too simple would not lead to acquiring new knowledge and skills. With this in mind, Rika worked on creating an ideal balance between problems with various levels of difficulty.

"I incorporated into the problems topics that high school students would be familiar with, such as Twitter and public Wi-Fi. For example, one of the problems that I created was about the GPS information of a photo posted on social media. It asked: ‘When you tweeted a photograph of yourself eating out, a friend figured out your location. How was this possible?’”

In this way, one after another, Rika produced problems that students could relate to. She finally succeeded in completing 25 problems to be solved in 45 minutes, playing her part in the successful holding of the “0th Competition”. 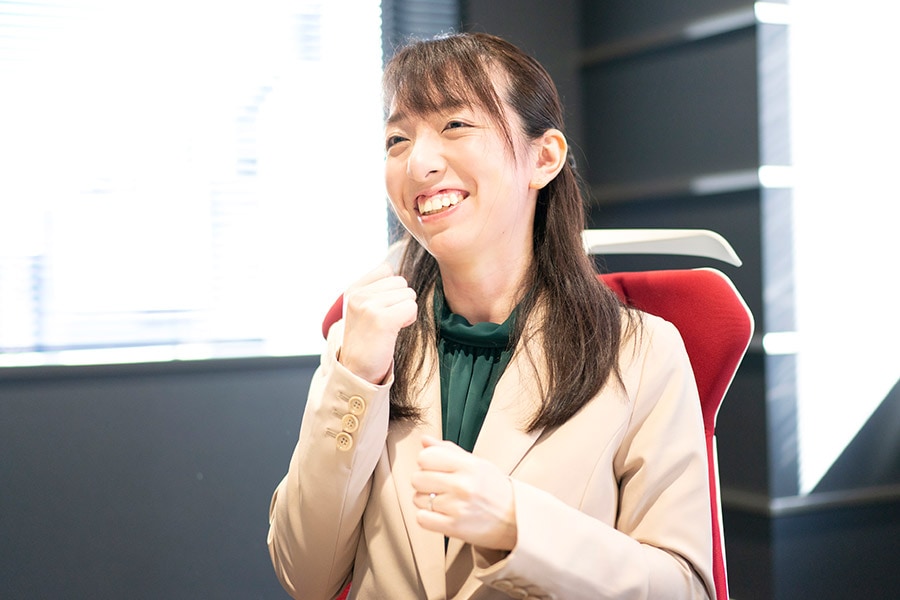 In the following year, 2020, the “1st Competition” was set to be held based on experience from the previous year. Rika was again appointed to be in charge of developing and managing Cyber Quest. Then came the unforeseeable COVID-19 pandemic, which led to the competition being conducted online remotely.

For the “0th Competition” of the previous year, high school students physically gathered at a venue where they used PCs and network environment prepared by the organizer to solve the problems. This year, however, it was necessary to modify the competition environment so that students nationwide could participate remotely.

"We had to provide an environment that had all of the tools needed to solve the problems. Some of the know-how we acquired from the previous year's competition was useful, but for most of it, we had to start from scratch."

Various considerations were made, resulting in the creation of a cloud-based virtual PC environment to which each school could remotely access. Since troubles in connecting to this environment were expected at the actual competition, rehearsals were held for the students to try out the cloud environment.

As she interacted with high school students during the rehearsal, Rika saw herself turn completely into a supporter watching over everyone's growth. Finally, after half a year of preparation, the finals of the “1st Competition” were held in December 2020. 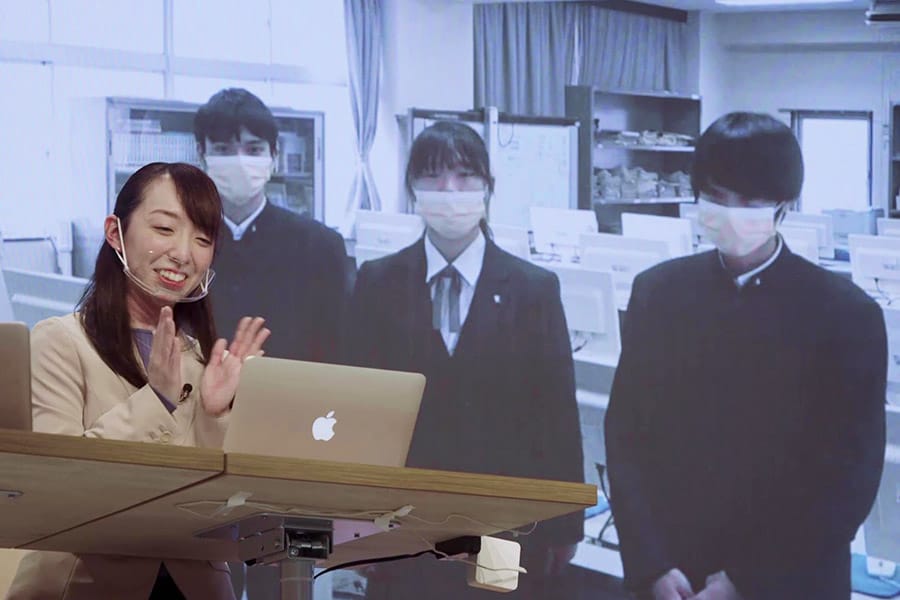 Participating in the finals were six teams from around the country that made it through the preliminaries. Students were displayed on a broadcasting screen set up at the live streaming venue. Rika breathlessly watched over this scene.

"Watching the students’ excitement and a sense of accomplishment when they solved a problem, I couldn't help cheering ‘You did great!’ Even though it was supposed to be a competition, I was cheering for every student equally."

Fortunately, the students had fun taking on the problems created by Rika. There were also some dramatic reversals, which ended up in an exciting competition overall. Participants expressed their desire to join in again next year and voiced their satisfaction at being able to make complete use of what they had practiced.

Developing the ICT human resource of the future Having been involved in the Singularity Battle Quest two years in a row, Rika is already going forward with preparations for next year's competition.

"For the next competition, I intend to create more opportunities to talk with each of the students directly, so that I can develop a competition that will lead to the steady improvement of their skills. In this way, I hope to support ICT education that is tailored to all levels and interests."

Rika says that she wants to continue conveying the appeal of ICT to high school students in order to develop the human resource of the future.

"I find it rewarding to be involved in the education of students and to see their growth close up. In the future, students who have participated in the competition may not only take part in ICT-related work but they may also develop new services used by people all over the world. I think that it is invaluable to be involved in opportunities to create such a future."

Wanting to convey the appeal of ICT to as many young people as possible, Rika will continue with her own journey.