Hitachi and Royal Mail are delivering a cleaner future

Royal Mail has the largest fleet of vans across the UK, with over 38,000. James Baker, from Royal Mail, said: ‘Really for us, it's about how we reduce air pollution, how we improve air quality in those areas, and really transition our whole fleet to the lowest-carbon delivery fleet that we can.’

James Bracegirdle from Hitachi outlined the objectives...
‘The aim is to obtain the telematics data from the vehicles, data from the charge points, operational schedules, DNO capacity data and locations of public charge points to analyse and trial different methods around profiled connection and demand-side reduction to charge the vehicles in the most efficient way for both the fleet and the distribution network operator.’

Reducing Demand on the Grid and Infrastructure Investment

One of the key concepts being tested is demand-side reduction, or ‘flexibility’. This is where the grid will ask the fleet to stop charging or reduce charging at certain times of the day, in return for a payment. Optimise Prime will help Hitachi understand whether a fleet like Royal Mail or Centrica can deliver that flexibility to the grid. If they can, it may be an opportunity for DNOs like UK Power Networks to use that as a mechanism to alleviate the stresses and the load on the grid, at certain times of the day, and reduce the requirement for the DNOs to invest in substations, new transformers, and new cables. Digging up the roads and putting in new cables and infrastructure is disruptive, expensive and time-consuming, so better managing the existing network capacity is a key experiment that Optimise Prime is running.

Data is at the Heart

By the smart use of analytics and data, Hitachi is able to identify when to charge the fleet at the cheapest times of the day. James Bracegirdle says:

‘By analysing the telematics data, and the schedule data, we work out the optimum charging profile for the fleet in the depot. This allows us to deliver the amount of energy to the vehicle that's required for the following day’s operations. We're not delivering the energy as soon as the vehicle arrives back to the depot and as soon as it's plugged in. We're deciding how much the vehicle needs, and when is the best time to deliver the energy, taking into account the strain on the network, cost of energy and how much energy the depot is consuming at that point in time. If we can charge the vehicles later on, in the evening or the early hours of the morning, then it may reduce the cost of the transition to electric for Royal Mail.’

The trials have helped Royal Mail understand how and when their vehicles can be charged. In turn this is informing them on the size of the vehicles and the type of charging infrastructure they need: whether it is super fast chargers or slightly lower-speed ones. The sharing of knowledge between all the partners has been the key to the success of Optimise Prime.

A world first that’ll make a lifetime of differencePrevious 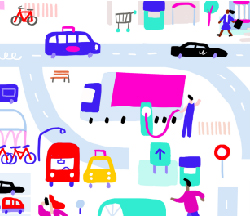