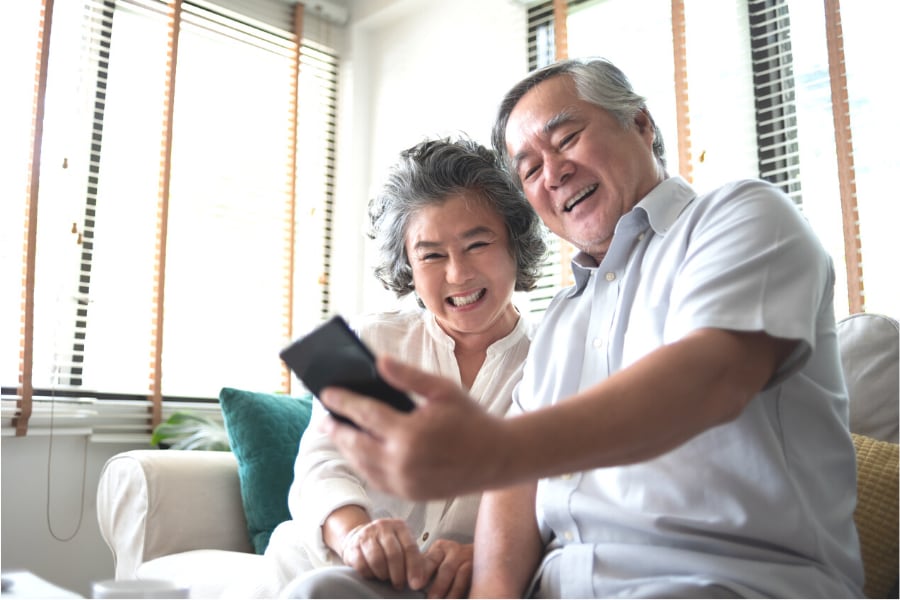 As Hitachi, Ltd. wants elderly people in rural areas to enjoy freedom of movement and to be able to go wherever they want whenever they want, Hitachi is tackling the development of a new service in collaboration with Social Action Organization, which is working to improve and lessen the need for nursing care by taking advantage of information and communications technology (ICT).

The service that is being developed offers elderly people struggling to get around in their daily lives a mode of transportation that takes advantage of pick-up vehicles owned by nursing care facilities. The elderly users of the service use a smartphone app to call a vehicle to take them shopping, to the hospital, and other places.

Proof-of-concept testing began in November 2021, and expectations are increasing that this will become a new means of transportation to add to existing bus and cab services.

Japanese society is rapidly aging, and there are many challenges for a fulfilling life in retirement. One is the issue of transportation. In urban areas, public transportation networks, such as buses and trains, are well developed, but in regional cities and in rural and mountainous areas, getting around is inconvenient without owning a car.

However, amid a spate of car accidents that are thought to have been caused by driving mistakes by elderly drivers, there is a growing call for the voluntary return of driver's licenses, creating a situation in which the elderly in rural areas lose their means of transportation and where even everyday shopping becomes inconvenient. 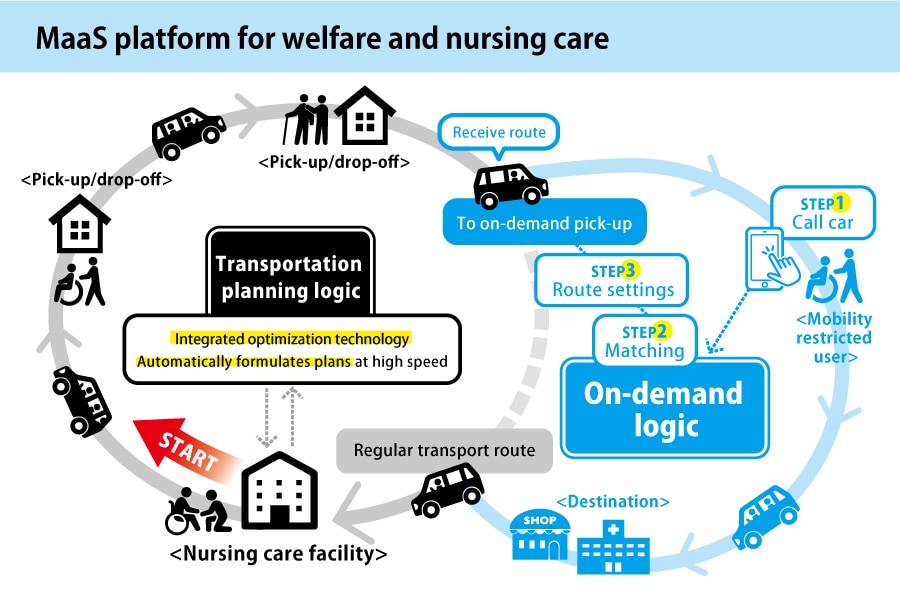 To solve these problems, Hitachi, Ltd. is developing a MaaS platform for welfare and nursing care. MaaS stands for "Mobility as a Service," which is a next-generation mobility service that takes advantage of ICT and other technologies.

The platform offers users a pick-up service that takes advantage of pick-up vehicles owned by nursing care facilities. By using a smartphone app, users of nursing care facilities can use the pick-up vehicles not only to get to and from the facility but also for shopping and hospital visits. This will enable the elderly to go out freely even in areas where the transportation infrastructure is not well developed.

This is made possible by "on-demand logic." The system matches a vehicle with the user's request for a ride while also combining carpooling with people who use the pick-up vehicle to take them to and from the nursing care facility. 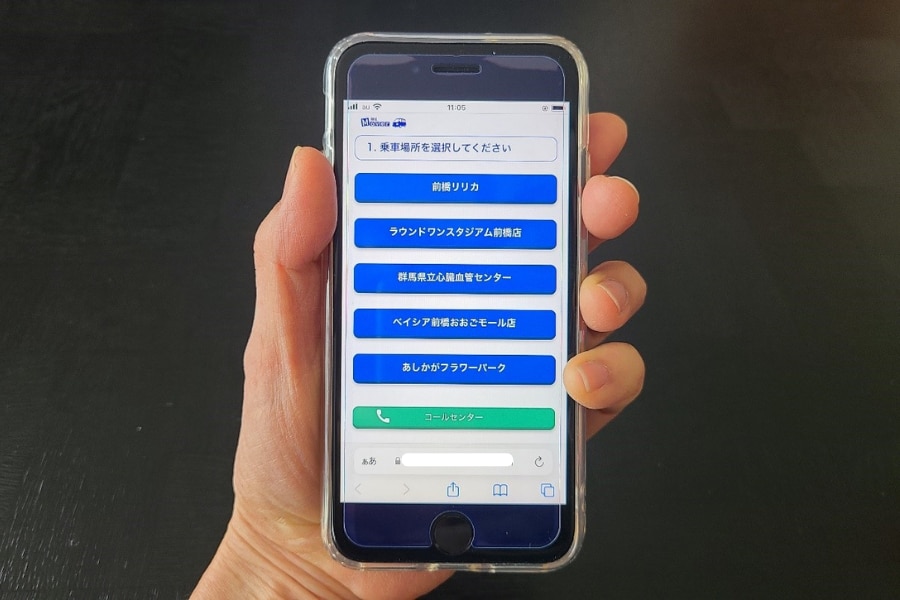 A screen from the app developed by Social Action Organization

The user simply selects their location and destination and sends the request using the smartphone app, which has a simple design and is designed to be easy to use, even for the elderly. Users that cannot use a smartphone can also make requests by phone.

"The users of day care center are mainly those that visit therefor rehabilitation. However, even if the user does rehabilitation at the facility, staying at home all other days and not moving their bodies reduces the effectiveness of the rehabilitation. On the other hand, if they have more opportunities to walk, such as when shopping, it will help improve their health and prevent dementia. That is why we started helping people go out using welfare vehicles owned by nursing care facilities. Hitachi approached us when we struggled to solve that problem." 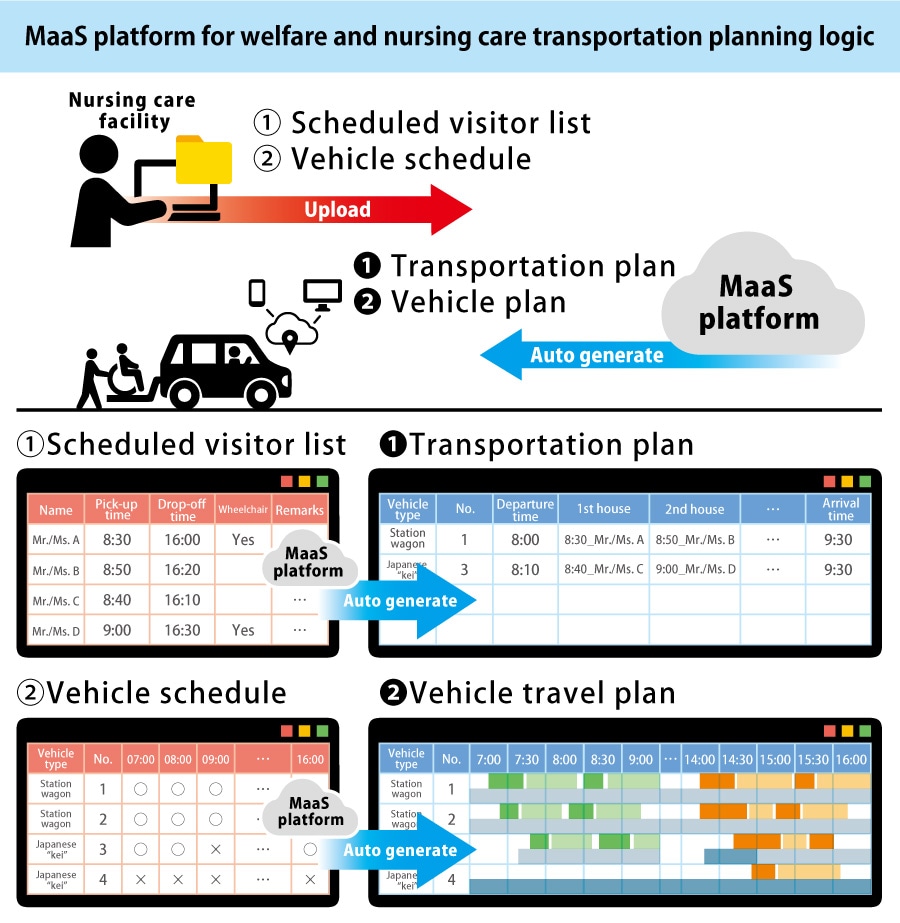 The MaaS platform for welfare and nursing care is expected to solve the problem of getting around for elderly people that live in rural areas, and Hitachi's proprietary "transportation planning logic" is essential toward realizing this kind of transportation service.

This system automatically formulates computerized transportation plans for vehicles used to take people to and from day care center and digitizes the analog transportation plans previously made by staff at nursing care facilities. The system formulates the transportation route at high speed and then dispatches vehicles, taking into account whether the user has a wheelchair, an escort, and other user conditions.

In the past, it took a lot of time and effort to formulate a transportation plan, but with the introduction of this system, a simple transportation plan can be created in about one minute. Even if the conditions are complex, such as in the case of formulating a plan for 90 users and 15 vehicles, the system can formulate a plan in less than 10 minutes. The time required to formulate a transportation plan has been reduced to about one-third of the previous time, which "also led to a workstyle change," says Mr. Kitajima, executive director of Social Action Organization.

"Originally, the transportation plan was created by experienced staff members using pen and paper. It was a very time-consuming task that was also dependent on individual skills, and it was also a source of overtime work. However, by using this platform, we are now able to formulate transportation plans quickly, thereby reducing the burden on staff."

"We want to develop it as a new transportation service." 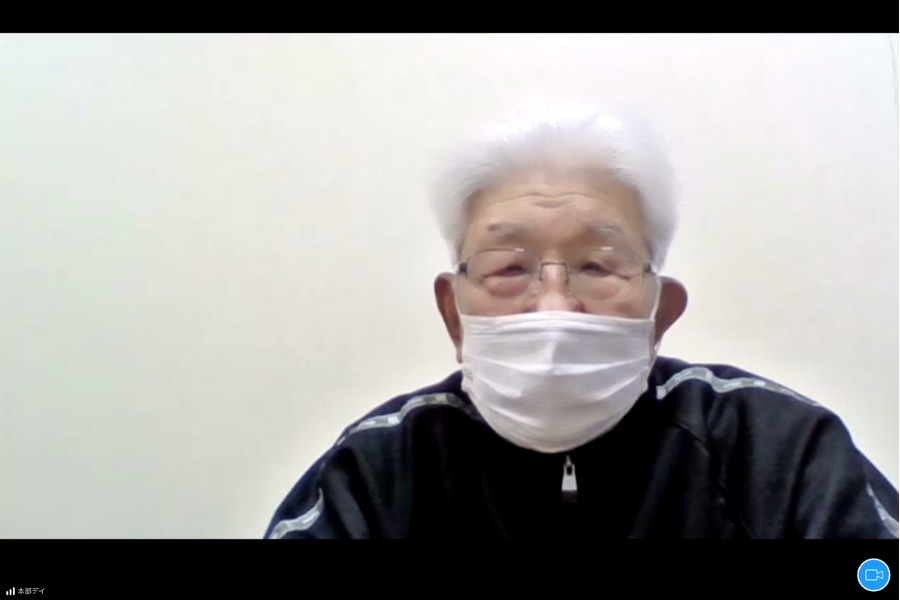 "Buses only run once an hour during the day, and cabs are quite expensive, so I found it very inconvenient to go out.",says Mr. Sosuke Kobayashi, aged 83, who lives in Gunma Prefecture. Since returning his driver's license several years ago, he had been living a life of inconvenience. However, a staff member at a nursing care facility recommended the transportation service to him, and after trying it, he says with a smile on his face, "The car came quickly, which was fantastic."

"I have used the service twice so far, including when I went to City Hall to vote. It took less than 10 minutes after I called the service for them to pick me up. They told me they can pick up not only me, but members of my family as well, so the next time I have the opportunity, I would like to take my wife with me to go shopping at the nearby supermarket."

In addition to the existing bus and cab services, the MaaS platform for welfare and nursing care is expected to become a new means of transportation for the elderly, who have difficulty getting around. Aehui Gil of Hitachi, Ltd. talks about the future development of this platform:

"We would like to develop this service as a new transportation service in collaboration with the local governments and nursing care facilities that are trying to solve mobility issues for the elderly. We will also work to make it a transportation service that enables the elderly to move around freely, ensuring that they can also visit family members who do not live nearby."