An Interview With A Monk Who Wears Heels: How To Create An Inclusive Workplace For LGBTQ+ People? Many companies in the world are in discussion about creating an inclusive workplace for all employees. But the challenge is, how can we make an impact on that from today going forward?

“I’m a homosexual monk,” says Kodo Nishimura, who is a Buddhist monk, Makeup Artist, LGBTQ+ Activist, and Model. In this article, Kodo talks about his background and explains how to create an inclusive workplace for LGBTQ+ people. 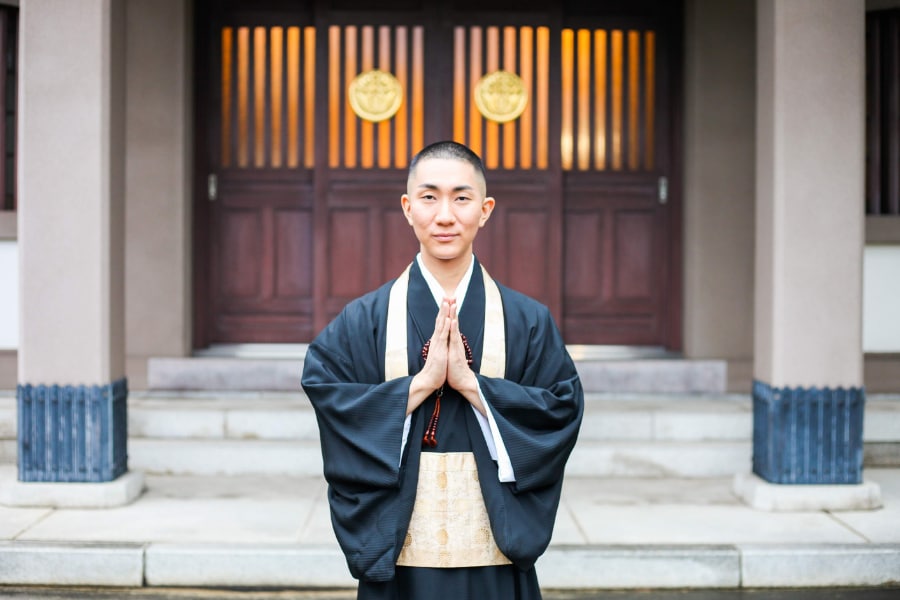 Kodo Nishimura, who was selected by TIME magazine in 2021 as a Next Generation Leader

--First, we would like to ask you about yourself. Please tell us how you became a Buddhist monk?

Kodo Nishimura: I was born into a Buddhist family in a temple that has existed since the 16th century. Because of that, I was expected to inherit the temple and follow the tradition. However, there were lots of expectations to behave right as a monk, such as shaving my head. I used to always be rebellious against these expectations. So, after graduating from high school, I chose to go to the US.

The experience of living in the US taught me a lot. By meeting lots of people from very different backgrounds, I learned that each person is unique, and also how to value my authenticity. By this reflection, I felt being homosexual and being born in a temple was unique. So, I decided to reconnect to Buddhism and came back to Japan to become a Buddhist monk. 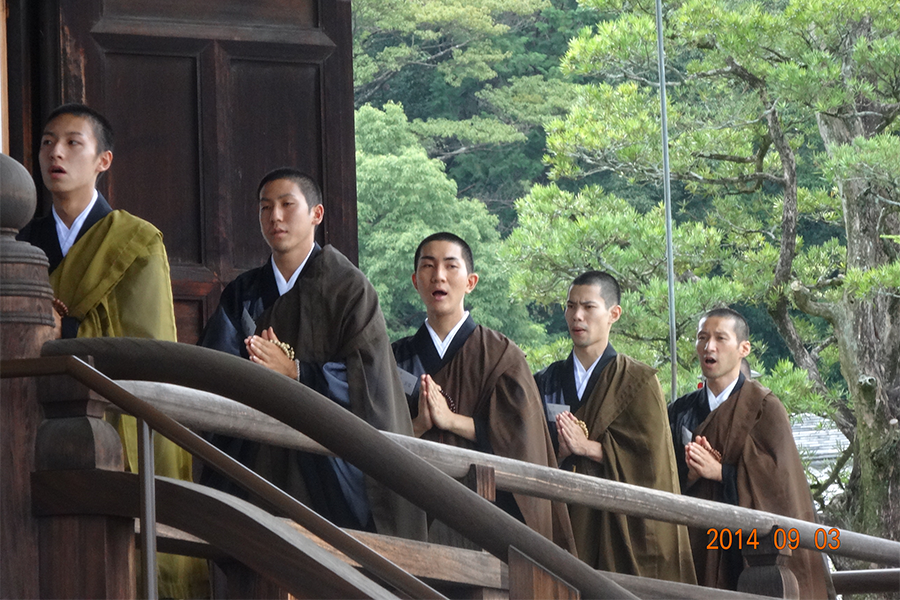 Kodo doing his training to become a monk

--And then, you started your career as a Buddhist monk in 2015. How do you empower diverse people using Buddhism?

By meeting many people who feel limited or guilty because of their sexuality, I realized these Buddhist messages could help empower diverse people in the world. 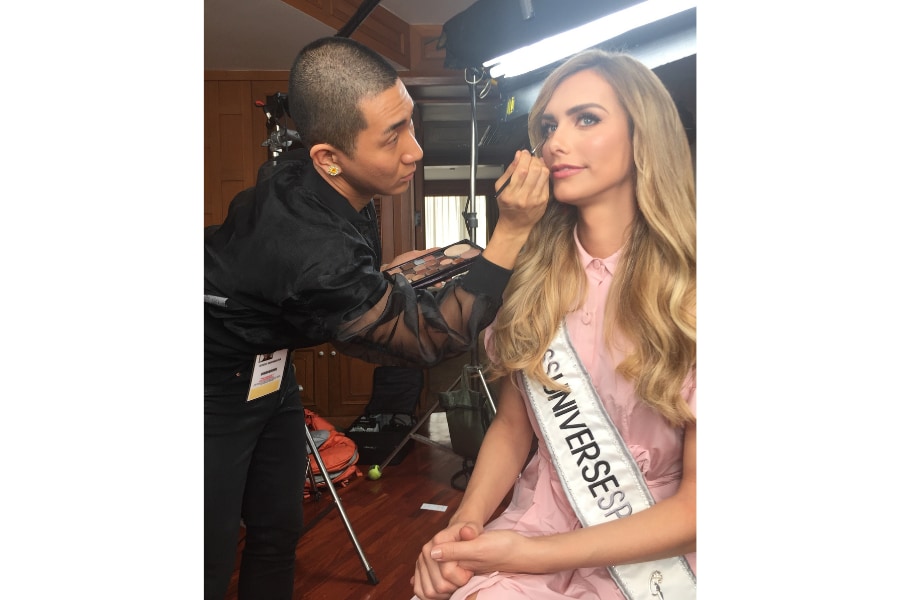 --You are also a makeup artist. How did you become one?

Kodo: When I was little, I loved dressing up as a princess and playing with makeup. However, because of the societal values in Japan, I felt, as a boy, that biological males were not accepted if they were wearing makeup. But when I moved to the US, I saw men wearing makeup. I felt that it was okay to do that.

There was a specific situation where I learned how makeup could be a tool to empower people. When I was studying English in Boston, I made a precious friend who was also an international student from Japan. She was struggling in academics and her relationships. To encourage her, I decided to do her makeup. Having just one eyeliner transformed her profoundly. The confidence that she gained through the makeup wasn’t washed away; even when the makeup was washed away.

I felt that the more I studied makeup, the more I could empower people, including myself, because I used to feel very inferior both as a homosexual person and as an Asian. So later, I started to assist a makeup artist working with Miss Universe in New York. That’s how I became a professional.

From this experience, not only Buddhist wisdom, but also makeup is powerful, so that is why my mission in life is to empower and liberate people sharing Buddhist wisdom and beauty. 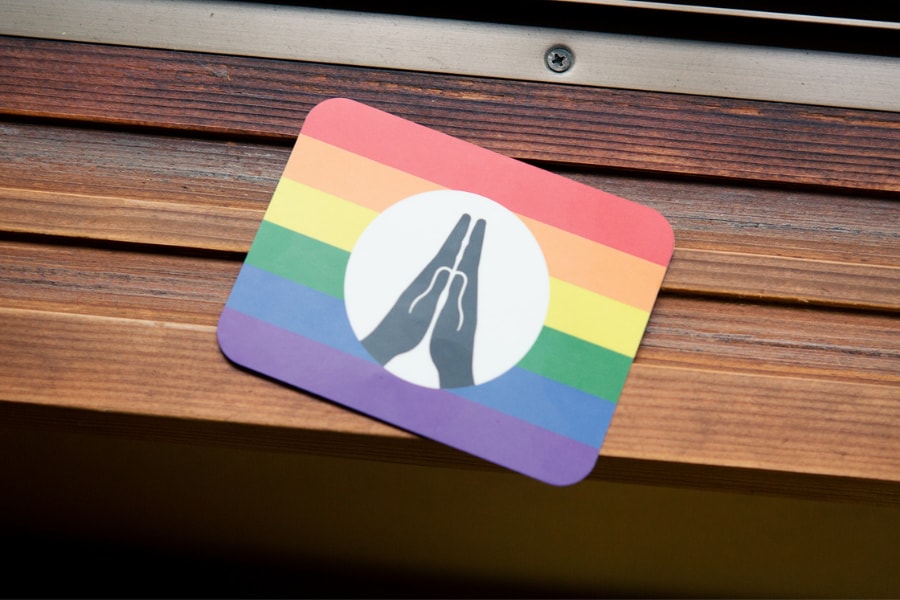 One of the core beliefs of Buddhism is that “All creatures should live happily.”

--And you are an LGBTQ+ activist. You became an advocate for the rights of LGBTQ+ people.

Kodo: Yes, I became an activist because of some things that I struggled with as a child. I used to love watching TV anime, but all the LGBTQ+ characters in anime were often portrayed as villains and got defeated in the end. By watching anime, I felt scared to tell other people that I’m homosexual as I thought I might be discriminated against or isolated in some way.

That’s why I want to give bright and noble representations of LGBTQ+ people to Japan and the world, so that people get to know that homosexual people also, can be superheroes.

Asking questions is a good starting point for an inclusive workplace 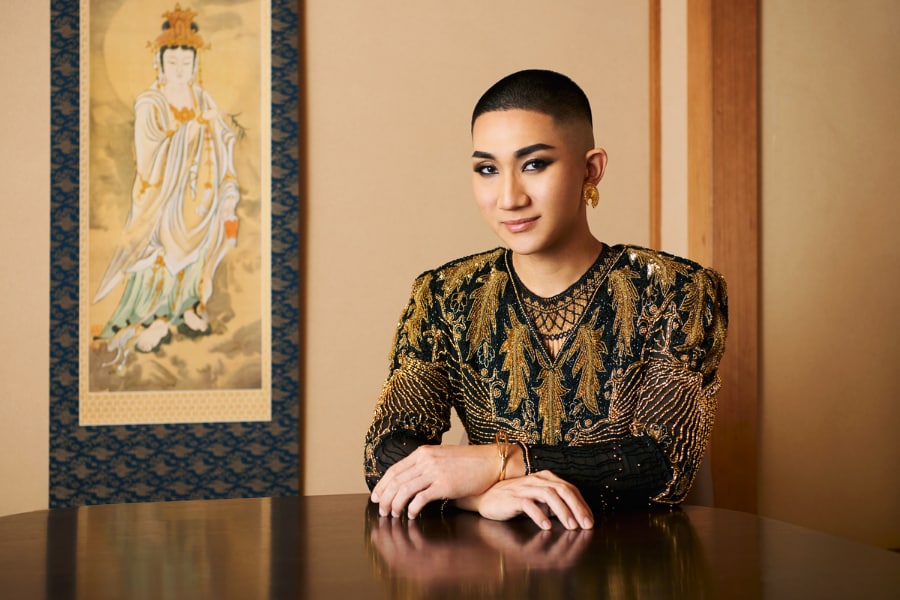 Kodo: First, people must be aware that everybody is different and so respect those differences. In addition to this, it is important to create a work environment where people are comfortable enough to share their feelings. One way to do that is to ask questions such as “Would you like to share your concerns if you have any?” or “Would you like to share your opinions or feelings?” That kind of attitude is going to give a sense of freedom and acceptance to many people.

These questions can help with creating an inclusive workplace. For example, you can know that a biologically male person may need a private space to take care of their body or do their makeup. Asking questions is a good starting point for knowing individual needs and creating a safe environment where people feel free to speak up and not be discriminated against. 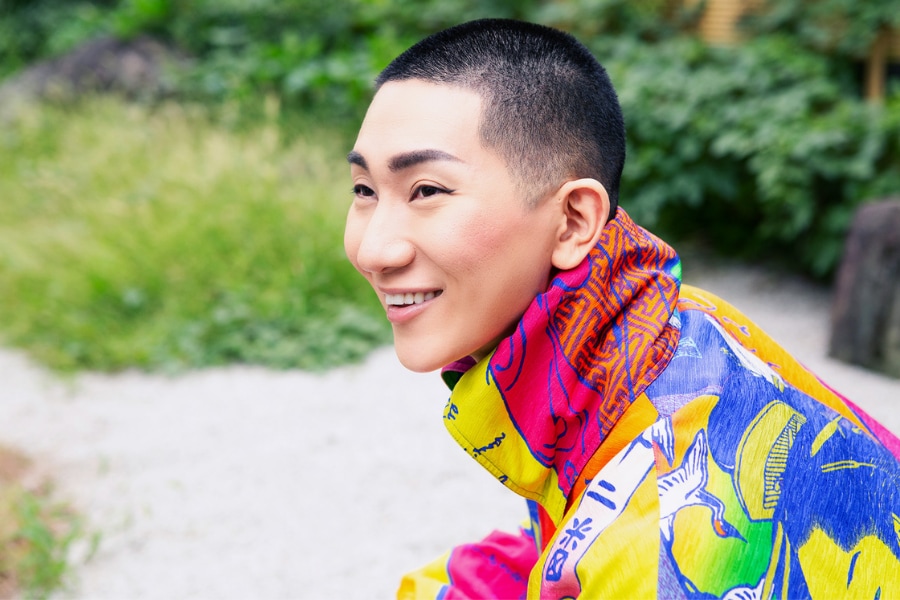 --Are there any other ways for companies to build an inclusive workplace where LGBTQ+ people feel respected and listened to?

Kodo: Whenever you do orientations at the beginning of a term or a project, it’s important to tell verbally that you do not tolerate discrimination based on sex, race, or any differences, and value professionalism and good morals. This is what the United Nations tries to do through leadership programs where they teach leaders to be transparent about the rules.

Also, whether you use English or any other language, it’s nice to ask the other person, “How do you want to be called?” or “Do you prefer she, he, or they?” If you are in Japan, you can ask the other person, which do you prefer, kun(often used for teenagers and young men), chan(often used for young women), or san(most closely resembles “Sir/Madam). For example, when I am called Kodo-kun, I feel that the other person sees me as a male, and I don’t feel seen as who I really am. But I feel more comfortable if it’s Kodo-san because it sounds more gender-neutral. Kodo-chan is nice if it’s between friends. So, asking how they want to be called is something everybody can do.

Sometimes companies use expressions like “male workers” and “female workers.” But it’s more about the biological aspect of people and has nothing to do with their professionalism. Furthermore, some people are transgender or intersex and cannot be divided into males or females. So, we have to see the team based on their performance, not their sex. 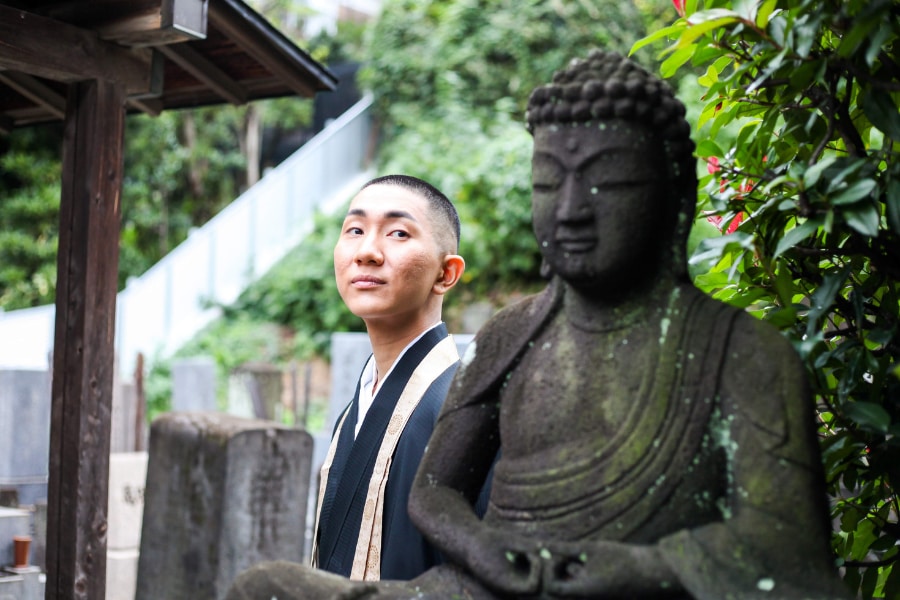 --Next, we would like to ask about “being outed,” which can be a serious problem in the workplace. What do you think companies can do to prevent these unwanted outings and protect their employees?

Kodo: I think one way to prevent that is to hold learning sessions about different people, including not only LGBTQ+ people but also those who face similar challenges such as living with a disease. This session can help give more awareness and understanding of the challenges that they face every day.

It is also important to share more data to increase the awareness. For instance, about 80 percent of LGBTQ+ people have not “come out” in their workplace as they don’t want to do so. Some even committed suicide because of being outed.

Holding learning sessions and providing data are actions that can help prevent these unwanted outings and protect their employees. 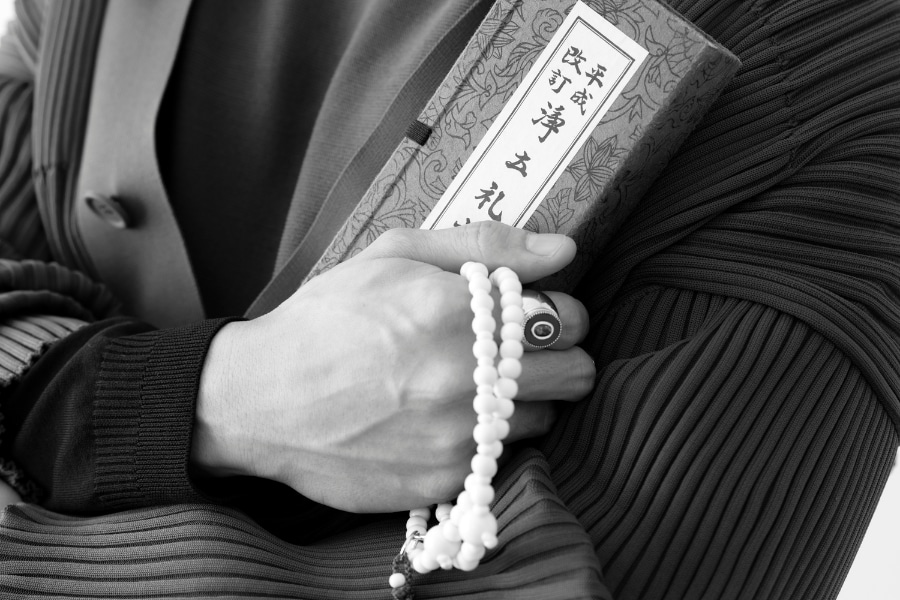 --What do you think are the benefits of making an inclusive workplace?

Kodo: Diversity and inclusion can enhance innovation and improve overall work. One time I talked to a biologist. She said that homosexual people exist to bring diversity, and if not for diversity, any creatures cannot evolve. There have to be diverse individuals to come up with new ideas or bring innovation. So, we have to understand that you can do some things because you are different. You can be empathetic because you are different.
In my opinion, feeling safe and being heard are two of the best things for anyone. That way, we can perform better and be happy enough to care for others. That’s very beneficial.

The world that I would love to see 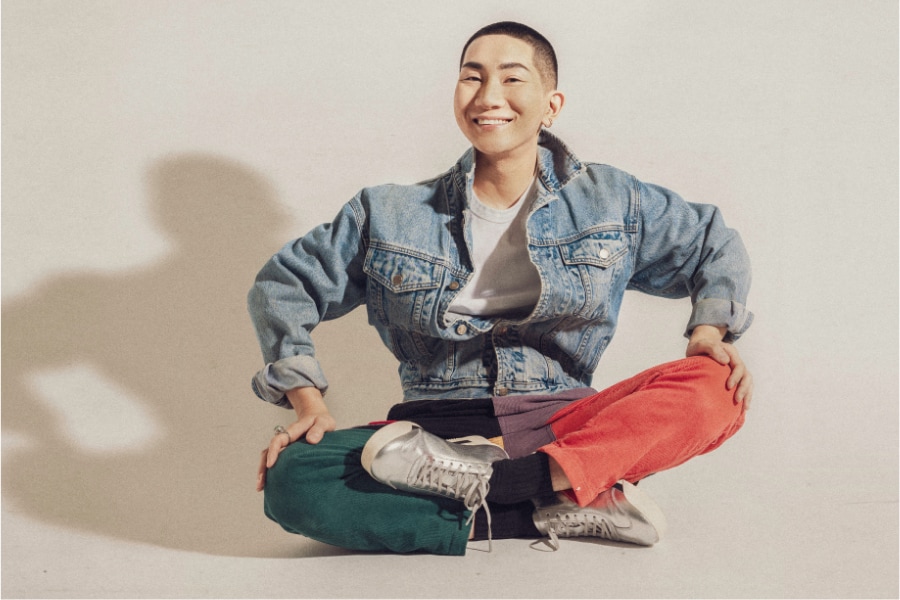 --Do you think there are any differences in people’s understanding and empathy toward LGBTQ+ issues between Japan and other countries?

Kodo: I think the difference is that people in Japan are not shouting for, nor against LGBTQ+ rights as loudly as western countries are. I don’t really see huge demonstrations or violence directed at LGBTQ+ people in Japan.

On the other hand, the situation in the US is a bit different. For example, I saw a lot of protests, parades, and demonstrations for LGBTQ+ rights. But at the same time, I saw a lot of violence directed at LGBTQ+ people, especially transgender women of color.

--Finally, could you tell me what kind of world you would like to see by promoting diversity, equity, and inclusion?

Kodo: I think discrimination and injustice will always be there as long as we are human. It’s a human tendency to want to discriminate and categorize people.

But it would be nice if we value professionalism in life and the beauty within our hearts. If we can see such beauty, we will work harder to be good people. That’s the world that I would love to see.