In March 2021, Chubu Electric Power Grid commenced operations at its Hida-Shinano frequency conversion facility (hereinafter referred to as "Hida Converter Station"), which enables the interconnection of power systems with different frequencies. By connecting the facility, built in Takayama City, Gifu Prefecture, to the Shin-Shinano substation (TEPCO) in Nagano Prefecture through an aerial cable that is approximately 89 km long, electricity between eastern and western Japan can now be interconnected.

Hitachi’s HVDC system has been installed at Hida Converter Station. The system increases the interconnection capacity between regions that uses different frequencies and enhances power supply capacity in the event of a large disaster such as an earthquake. In addition, its suitability for long-distance power transmission can lead to the expansion of renewable energy, including solar power and wind power.

He added: "The TEPCO nuclear power plant along the Pacific coast of eastern Japan was severely damaged by the earthquake, and the Tokyo metropolitan area was experiencing a shortage of electricity. Transmitting electricity from a power plant in western Japan was considered, however, not enough power was made available due to the limited capacity of the conversion facility. As a result, TEPCO incorporated planned power outages and encouraged the public to conserve electricity. In the wake of such a difficult situation, we decided to build a frequency conversion facility here with a capacity of 900 megawatts." Advantages of the HVDC system

The difference in frequencies began with the initial import of generators during the development of commercial electric power systems during the Meiji era. Generators were imported to Japan from the U.S., which uses 60 Hz, to western Japan, whereas for eastern Japan, generators were imported from Germany, which uses 50 Hz. This frequency difference still remains. Thus, in order to transmit power between western and eastern Japan, it was necessary to convert alternating current (AC) into direct current (DC) and then to change the frequency. The HVDC system installed at Hida Converter Station makes such conversion possible. HVDC involves technology that transmits power using high-voltage DC. Compared to AC power transmission, the use of DC reduces loss of power during transmission, enables a large amount of power transmission over long distances, and is suitable for connecting systems with different frequencies.

"AC is cheaper to generate; however, it can only be transmitted for approximately 50 km by cable, whereas DC can be transmitted for over 1,000 km without losing power. Another major advantage of DC is its stability," said Mr. Hora.

Overcoming construction in an area that sees heavy snowfall

Since the 1970s, Hitachi has been at the center of most of the HVDC installation projects in Japan. Hitachi’s technology and knowledge, as accumulated through years of experience, are also being utilized at Hida Converter Station.

Satoru Kajiwara of Hitachi, who was in charge of the site and who supervised the project, said: “Hitachi supplied critical equipment for the Hida Converter Station project. This includes thyristor valves, which convert AC to DC, GISs (gas-insulated switchgears), which shut off power in case of an emergency, and AC filters, which absorb harmonics. These are all developed by Hitachi." Hida Converter Station is built in a mountainous area at an altitude of over 1,000 meters. During mid-winter, the area is covered with heavy snowfall of about 2 meters, and the temperature drops to -30°C, while the area reaches 35°C in summer.

"Our biggest challenge was to complete construction in a short period of time before the heavy snowfall began. Hitachi’s know-how, as accumulated through years of experience, was maximized and incorporated into the design of a system that can withstand harsh weather conditions for many years," said Kajiwara. 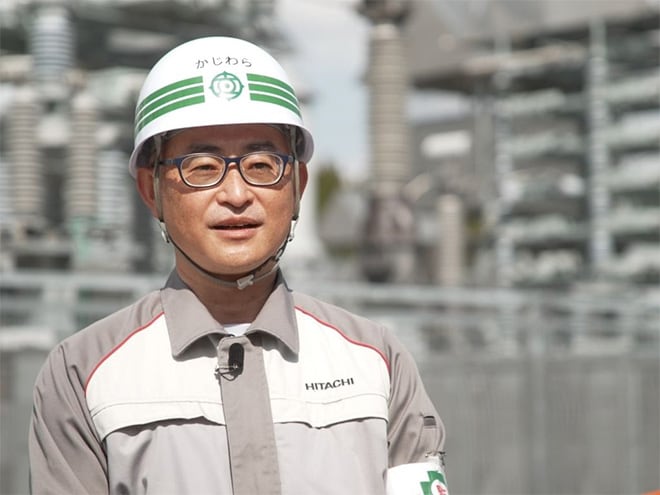 Satoru Kajiwara of Hitachi, in charge of the project

Contributing to the supply of renewable energy

Since the operation of Hida Converter Station commenced, expectations for supplying renewable energy are rising in addition to the interconnection of power with different frequencies.

In Japan, areas suitable for the large-scale production of renewable energy through wind power and mega-solar power are far from urban areas. Thus, a power grid to transmit renewable energy to consumption areas over long distances is required.

In order to further expand offshore wind power generation, which has been deployed in recent years, long-distance power transmission using submarine cables is required, and the HVDC system is expected to be effective for the long-distance transmission of such renewable energy.

"The need to transmit large amounts of power to consumption areas will continue to increase. In these circumstances, HVDC technology is expected to become more widely used," said Mr. Hora. Increasing expectations for the expansion of renewable energy

In November 2015, Hitachi, Ltd. and ABB, the world-leading electrical power equipment manufacturer, established a joint venture company, Hitachi ABB HVDC Technologies, Ltd., and this joint venture company proceeded with the project while incorporating the strengths of both companies. As of 2021, in terms of the DC conversion project at substations, the company holds the largest market share in Japan, as well as globally.

The HVDC technologies implemented at Hida Converter Station will strengthen the interconnection of electric power companies in the event of a disaster and will promote the expansion of renewable energy, along with an expected contribution toward achieving a decarbonized society.