"Green Transformation"(GX) in the Spotlight: What is Expected of Companies? 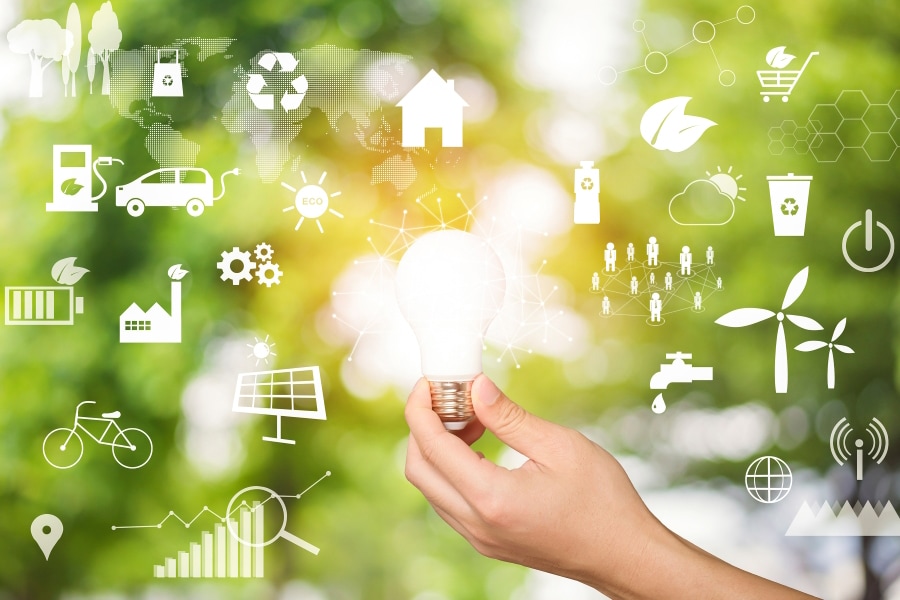 GX is in the spotlight: What is GX?

As efforts for sustainable society accelerate around the world, interest in "Green Transformation" (GX) is on the rise internationally. GX refers to an initiative that seeks to reform organizations and society by using technology to both solve environmental challenges and achieve economic growth, which are goals that are normally antagonistic to each other. What holds the key to this? In this article, global trends and company initiatives with respect to GX are discussed.

The basic idea of GX is to become a sustainable society by going beyond previous initiatives for saving energy, protecting ecosystems, and implementing countermeasures to atmospheric and water pollution, and take the next stop by using IT and other technologies to change the very systems belonging to society and industrial structures. 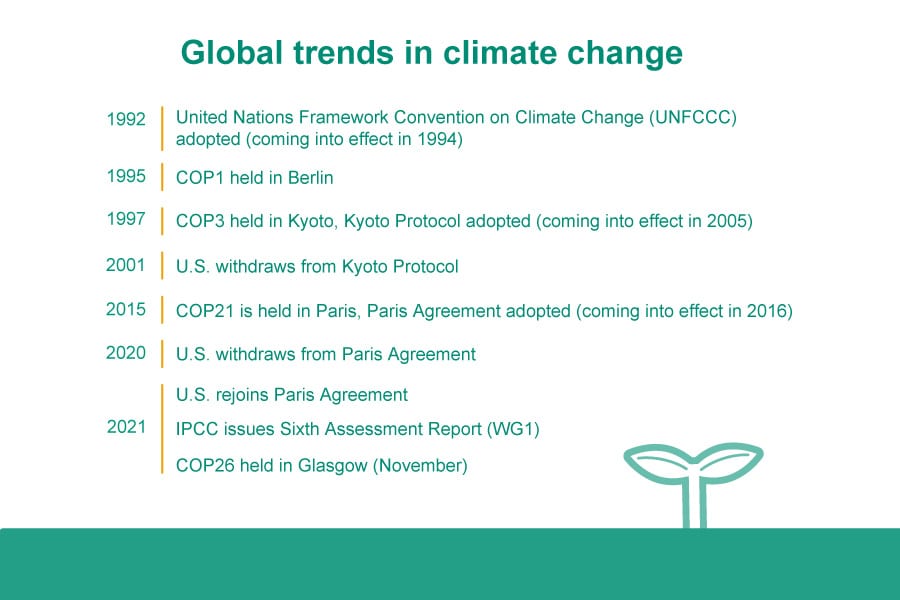 Based on this situation, initiatives targeting the challenge of climate change are accelerating.

The beginnings of international discussions go back about 30 years, to 1992. At the United Nations Conference on Environment and Development (also known as the "Earth Summit") held in Brazil, the United Nations Framework Convention on Climate Change (UNFCCC) was adopted. Since then, the Conference of the Parties (COP), which is an international conference on global warming mitigation based on the UNFCCC, has been held nearly every year.

The Kyoto Protocol was the first agreement to set numerical reduction targets for greenhouse gas emissions. The protocol mandated that Japan, the U.S., the European Union (EU), and other developed countries cut greenhouse gas emissions with the aim of achieving at least a 5% total reduction in emissions compared to 1990 for developed countries collectively.

The Paris Agreement, however, stipulated that not only developed countries but also all 196 countries that are parties to the UNFCCC should act to reduce greenhouse gases. In addition, it indicated the global long-term goal of "holding the increase in the global average temperature to well below 2 degrees Celsius above pre-industrial levels and pursuing efforts to limit the temperature increase to 1.5 degrees Celsius above pre-industrial levels."

As this trend gained momentum, it led to the agreement at COP26, held in the U.K. in 2021, to reaffirm the goals set forth in the Paris Agreement and to create a framework for decarbonization that includes developing countries. 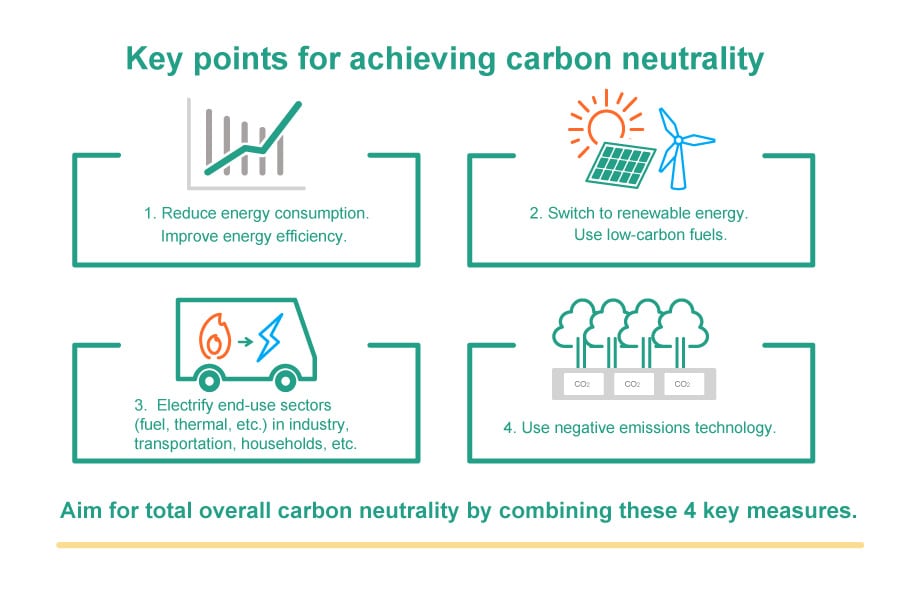 As a result of this global trend, companies are being called on to increase their efforts at addressing the climate change challenge. Companies aspiring to carbon neutrality need to find ways to reduce their greenhouse gas emissions to net zero. The Agency for Natural Resources and Energy, as part of Japan’s Ministry of Economy, Trade and Industry, has identified the following initiatives as key points.

Companies pursing various initiatives based on these four key points are encountering new demand. This is to not only reduce their greenhouse gas emissions but also to reduce those across entire supply chains, from raw materials procurement to disposal. 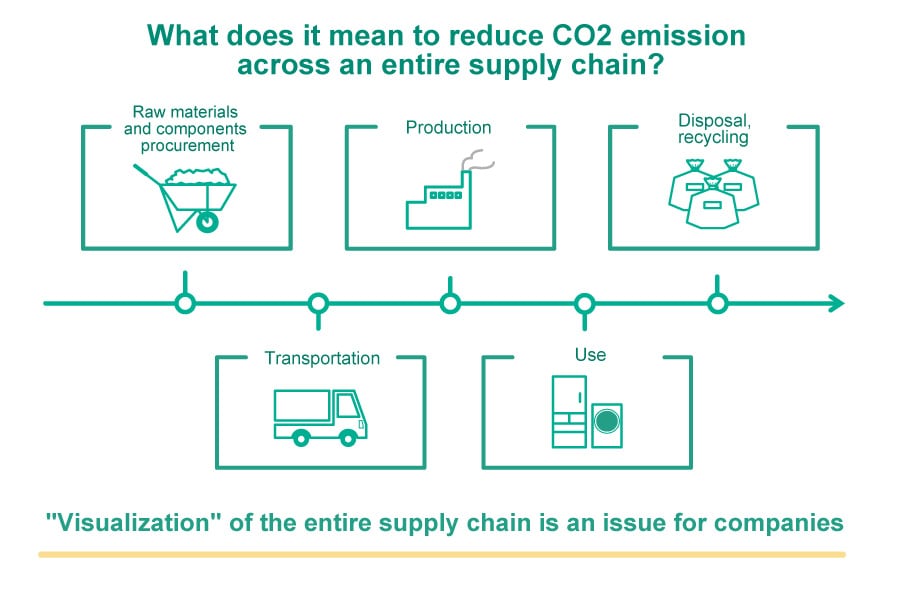 The GHG (Greenhouse Gas) Protocol, the international standard for calculating and reporting greenhouse gas emissions, comprises three scope categories. Scope 1 involves greenhouse gas emissions generated by an enterprise itself. Scope 2 involves emissions generated by the use of electricity, thermal, steam, and other energy sources provided by other companies. Scope 3 involves emissions from other business activities. The emissions of the entire supply chain are the total of these three scopes. Companies are being called on to pursue reductions in all processes.

"Visualization": An issue for corporate-level measures

In pursuit of carbon neutrality for not just companies but also for entire supply chains, one major IT company in the U.S., for example, announced that it will use low-carbon recycled materials in its products and will also encourage its suppliers to switch over to renewable energy.

Another example is in Japan, where a major beverage manufacturer has set a 30% reduction target for the greenhouse gas emissions of its entire supply chain by 2030 and has strengthened efforts aimed at disclosing information on emissions in each scope. Hitachi, Ltd. has also committed to the goal of achieving carbon neutrality that also includes its value chain, by FY2050. Initiatives at its bases and group companies are accelerating.

As various companies internationally strive to achieve carbon neutrality across their entire supply chains, the "visualization" of energy use, environmental impact, and other such factors will be important to driving such work.

However, even companies that have actively implemented their own energy conservation measures find it difficult to go as far back as raw materials and component procurement in their ascertainment and management of greenhouse gas emissions. This will require the creation of systems for "visualization"—the realization of which will require the application of IT and other technologies. This is one form of GX.

What is needed to drive GX?

In order to overcome the impending climate change crisis and implement GX, strong leadership at the management level that involves all stakeholders is essential. Additionally, due to the necessity of cross-departmental mid- to long-term initiatives, formulating roadmaps and developing and educating the people who will lead frontline projects will also be indispensable.

In Europe, which is leading the way in GX, governments are taking the initiative in creating rules for decarbonization. Measures have been put forth that include the imposition of a "carbon tax" in accordance with CO2 emission amounts. Another is emissions trading, i.e., the buying and selling of "emissions quotas" by companies with large CO2 emissions and those that have reduced their emissions.

Discussions on a carbon tax have begun in Japan, and if full-scale implementation goes forward, cost increases could become a challenge to companies. Conversely, for companies passionate about tackling the environmental problem, it will be easier to bring out their products.

Going forward, a higher level of initiatives focused on corporate GX will be called for in the quest for carbon neutrality across all of society.