On February 19, 2021, Hitachi, Ltd. announced the development of an image analysis technology that uses AI to rapidly ascertain large-scale disaster situations such as earthquakes and floods. Aerial images of the ground captured by drones and helicopters are analyzed by AI to accurately identify disaster situations—information that are useful in considering measures for saving lives and reducing damage.

In recent years, many regions around the world have experienced massive damage from natural disasters associated with climate change due to global warming and urbanization. Japan has also incurred enormous damage from large-scale floods, landslides, and the destruction of buildings, having suffered a series of disasters of its own, including the Great East Japan Earthquake in 2011, the Kumamoto earthquake in 2016, and torrential rainstorms in western Japan in 2018.

"Even as this technology was being developed, damage from disasters such as typhoons and earthquakes was occurring all over Japan, and this provided strong motivation for us to make it practical as quickly as possible." The idea was to utilize this technology to accurately and quickly grasp disaster situations using AI.

Immediately after a disaster, it is a matter of urgency for rescue teams to rapidly identify disaster sites and provide evacuation guidance to victims. This involves comprehensively grasping afflicted areas over a wide range, in order to rapidly find collapsed homes and cars where people could be trapped.

Furthermore, efficient victim assistance and recovery work following a disaster also depends on an accurate understanding of the state of the affected area, including knowing if there are blocked roads or collapsed bridges.

The technology developed by this project relies on using AI to analyze images of stricken areas captured by drones or helicopters. Targets for rescue operations are instantly recognized from these images, and areas where landslides or collapses of structures have taken place can also be discovered. 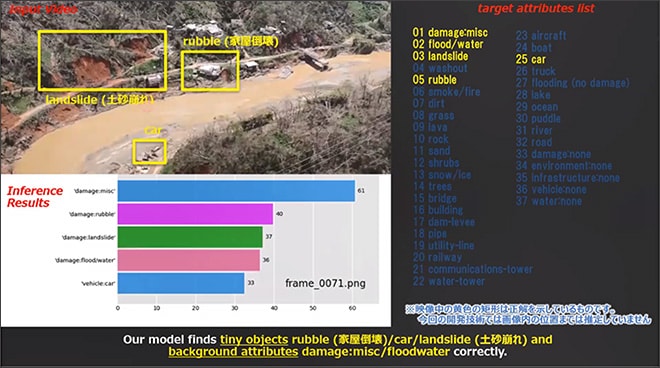 Soichiro Okazaki of Hitachi, Ltd. mentioned the barriers and challenges during the development of this technology, as follows:

"Targets that must be recognized in disaster sites range from large-scale events such as landslides and flooding to smaller things like cars and boats. Our challenge was to enable AI to accurately recognize even when the captured image contains multiple cases of such instances."

To overcome this challenge, Okazaki combined two recognition models. One focuses on wide-ranging, large-scale areas to ascertain the overall disaster situation, while the other directs attention to smaller areas to search for individual targets. This strategy enables both an understanding of the disaster situation across large areas and a recognition of smaller objects that are difficult for people to find visually.

Another challenge was the small amount of data available for AI learning. Large-scale disasters are, after all, not a frequent occurrence.

As Okazaki said, "By focusing on samples with little amount of data, such as landslides, we were able to train the AI so that we can obtain high-precision recognition even when there are not many data available.”

This technology achieved world-class recognition precision at the “Disaster Scene Description and Indexing”, hosted by the National Institute of Standards and Technology in the U.S. and held from April to July of 2020.

Immediately after a disaster strikes, the local government of the stricken area must accurately and rapidly assess the damage situation and engage in lifesaving operations as soon as possible. In cases when an earthquake, flood, or other large-scale event affects a wide area, the use of this technology makes it possible to analyze aerial images captured by drones and to find, with pinpoint accuracy, locations where rescue operations should immediately be directed.

After a disaster, insurance companies will also dispatch adjusters to the affected area to survey the damage. This technology lets them verify areas for priority investigation in advance.

Regarding the prospects for this technology, Yoshinaga says:

"This is a technology that uses AI to automatically recognize disaster situations from images of stricken areas, which is increasingly gathering attention. Together with local governments and our various partner companies, we plan to disseminate this technology with the hope to increase lives saved during a disaster and contribute to a safe and worry-free ways of living."