Intro to COP26 and Paris Agreement: Global Action Toward a Decarbonized Society 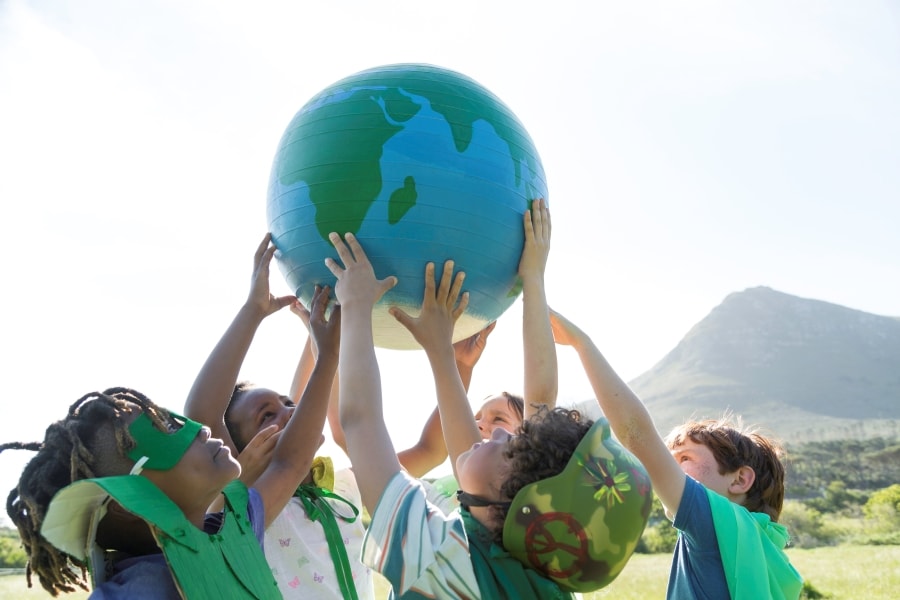 COP—the key to the issue of climate change: Explained simply

In November 2021, COP26 will be held in Glasgow, Scotland. When discussing climate change, the expression "COP" regularly comes up, but what is it in the first place?

This article describes how COP has transitioned to date, touching on its birth and milestones such as the Kyoto Protocol and the Paris Agreement.

It also discusses issues to bear in mind for the upcoming COP26 to be held in November of this year.

COP: An international conference focusing on the problem of climate change

Since the 1970s, people around the world have been increasingly viewing as a problem the negative effects of human activities on the global environment, such as deforestation, desertification, and global warming caused by greenhouse gases.

Recognizing that the world needed to take unified action against global warming and climate change, in 1992, the United Nations adopted the United Nations Framework Convention on Climate Change (UNFCCC), which went into effect in 1994. Based on this, the UNFCCC Conference of the Parties (COP) has been held almost every year since 1995.

COP is an abbreviation of "Conference of the Parties", a type of conference in which the participants are countries that are signatory to an international agreement.

Featuring international members, COP is a conference that, having set as its ultimate goal the stabilization of the concentration of greenhouse gases in the atmosphere, makes the international agreements needed to meet that goal.

Milestones: The Kyoto Protocol and the Paris Agreement 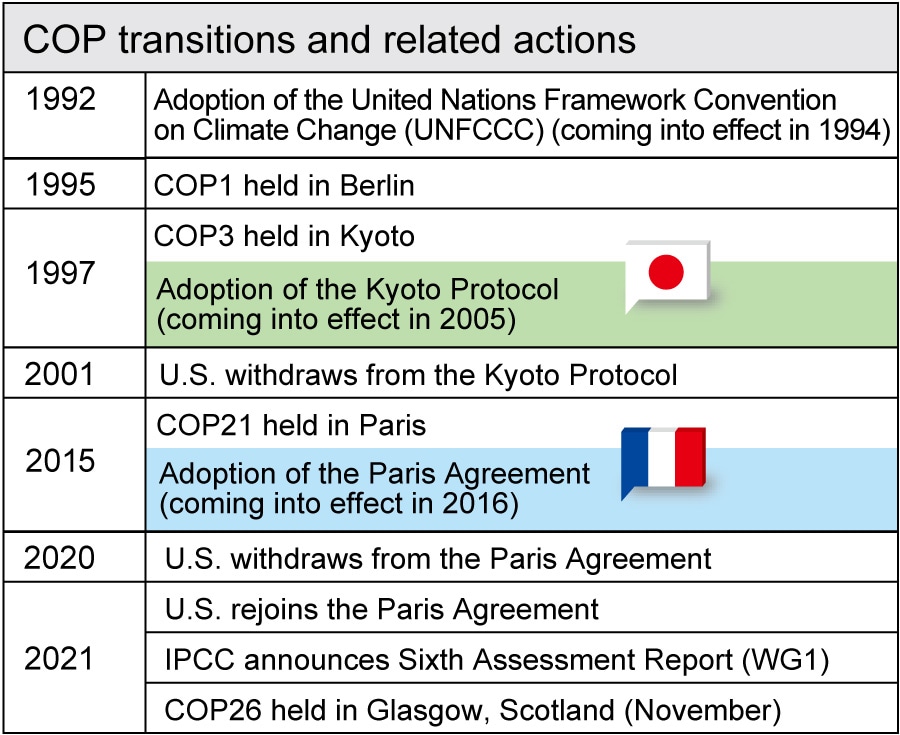 Because of conflicting interests between countries, global warming countermeasures face enormous difficulties, especially when attempting to get the international community to work together as one. However, despite numerous complications, COP has continued to go forward in service of overcoming the global crisis of global warming and climate change.

Adopted by COP3, the Kyoto Protocol was a landmark document that established for the first time international numerical targets for reductions in greenhouse gas emissions.

According to the Kyoto Protocol, developed counties/regions, including Japan, the U.S., and the European Union (EU), would be required to cut their greenhouse gas emissions. It was also decided to aim for a collective reduction by developed counties in greenhouse gas emissions by at least 5% (compared to 1990 levels) in the period between 2008 and 2012.

However, the Kyoto Protocol was met with some dissatisfaction because it targeted only developed counties for reduction mandates. The U.S. and Canada withdrew. With Japan also not participating in the second commitment period of the Kyoto Protocol (2013 to 2020), it became impossible to bring the international community together on this issue.

The Kyoto Protocol has tremendous significance in that it established specific numerical targets and mandated emissions reductions. However, the efforts of developed countries alone cannot solve global problems.

Moreover, the Kyoto Protocol is a framework for only until 2020. Under a new framework starting from 2020 that would succeed the Kyoto Protocol, it was essential to create a system under which the world, including developing countries, would collectively act.

Even during COP21, the large gap that existed between developed and developing countries made for difficult negotiations. However, on December 12, 2015, the Paris Agreement, a new framework for 2020 and onward, was adopted unanimously by all members of COP21.

Collective long-term global targets were established, which are "to limit global warming to well below 2, preferably to 1.5 degrees Celsius, compared to pre-industrial levels."

Given that, instead of only developed counties, all 196 countries that are party to the UNFCCC are expected to act to reduce greenhouse gas emissions, the Paris Agreement represents a historical turning point in countering global warming and climate change.

In August 2021, a report released in advance of COP26 drew a major response. This was the Sixth Assessment Report, released by the Intergovernmental Panel on Climate Change (IPCC), which is a United Nations organization that carries out scientific assessments on global warming and climate change.

"The Physical Science Basis," as one part of the Sixth Assessment Report contributed by Working Group 1, was highly impactful. Stating that there could be no doubt about global warming caused by human activities, it was the first to positively assert a relationship between the two.

Until now, the relationship between human activities and global warming was stated in terms of possibilities, but this report made clear the certainty of human agency in global warming.

In the putting off of implementing measures, this conclusion negated the excuse that there was no way to judge whether or not global warming was a result of human activities. 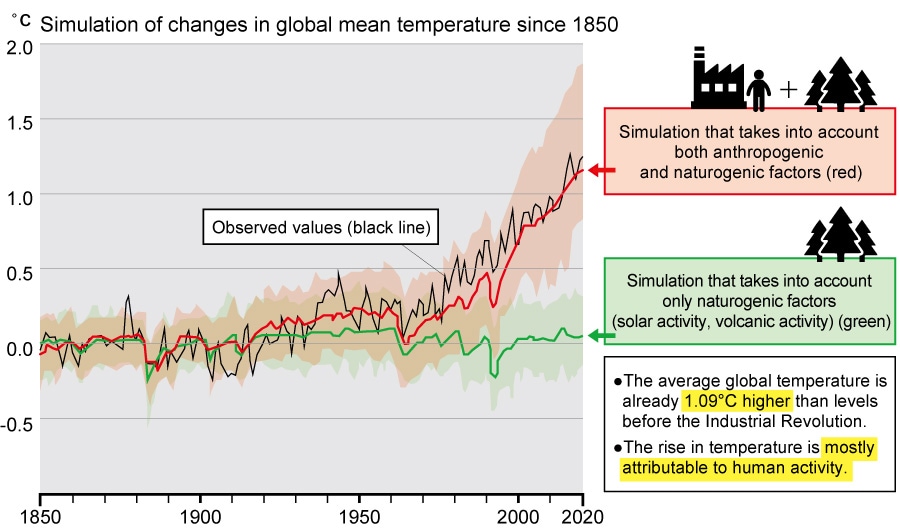 Created based on the IPCC Sixth Assessment Report

The next question is to what extent human activities are causing warming.

According to the IPCC report, in the recent past 10 years of 2011 to 2020, the average global temperature rose 1.09 degrees Celsius compared to levels before the Industrial Revolution (1850 to 1900). It is believed that nearly all of this increase is due to human activities. (See the above figure.)

If this is compared to a simulation that takes into account only naturogenic factors, the huge impact of human activities is clear.

Global warming is not simply a problem of rising average global temperatures. It is thought that, as it affects the entire global climate system, global warming will increase the frequency and power of abnormal weather events, such as high temperatures, heavy rains, droughts, and heat waves.

Actions by countries worldwide toward achieving a decarbonized society

The world has started to make significant progress toward achieving either the 2 degrees Celsius or 1.5 degrees Celsius target. Action taken by countries worldwide is intensifying as we approach the holding of COP26.

Although, under the Trump administration, the U.S. withdrew from the Paris Agreement in 2020, it officially rejoined this year under President Biden, who has committed to net-zero emissions of greenhouse gases by 2050. In April 2021, he raised the reduction target. Thus, the reduction target of 26%–28% by 2025 (compared to 2005 levels) was substantially changed to 50%–52% by 2030 (compared to 2005 levels).

Europe, which leads the world in countermeasures against global warming and climate change, has declared the EU’s net-zero emission of greenhouse gases for 2050. Previously, the EU had set a reduction target of 40% by 2030 (compared to 1990 levels), but in 2020, it considerably raised it and is currently aiming for a 55% reduction.

Japan also responded in October 2020, with Prime Minister Suga making a declaration of "achieving carbon neutrality and a decarbonized society by 2050 " in his general policy speech. In April 2021, the previous target of a 26% reduction in FY2030 (compared to FY2013 levels) was greatly raised to 46%.

For example, China has declared that it will be carbon neutral by 2060 and that it will reduce CO2 emissions on a per-GDP basis by over 65% compared to 2005 levels, by 2030. India, though it has made no declarations regarding carbon neutrality, has set a target of a 33%–35% reduction in emissions on a per-GDP basis by 2030 compared to 2005 levels.

As developing counties develop their economies, their greenhouse gas emissions also grow, so their importance in measures for countering global warming is on the rise. However, differences exist between countries in terms of their zeal in taking action, and they have high expectations with regard to assistance by developed counties. 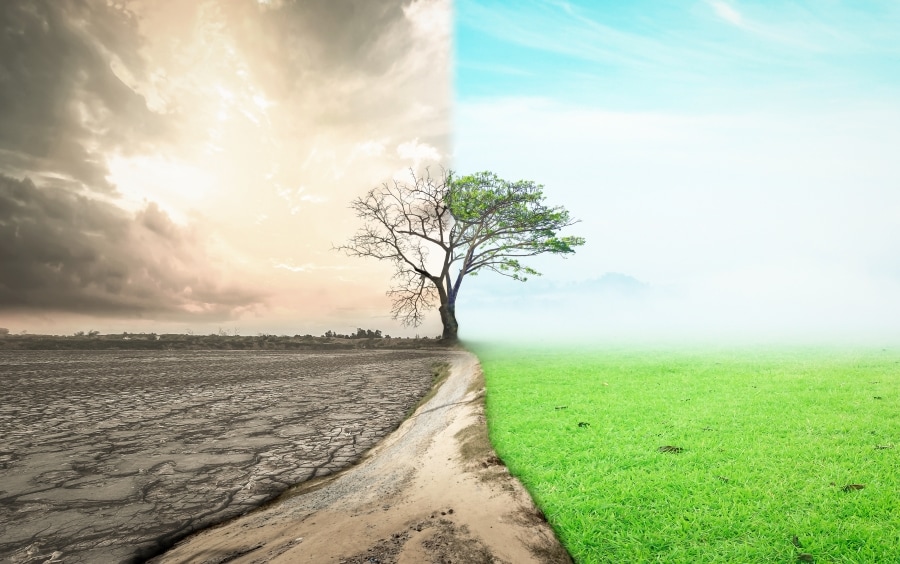 COP26: The critical juncture in measures for countering climate change

The Sixth IPCC report calls for greater-than-ever effort by all countries. Even a slight rise in temperature seriously threatens the Earth's environment, our lifestyles, and indeed our lives themselves. However, even if the reduction targets set by these countries with the aim of reducing greenhouse gas emissions are all achieved, it is believed that it still will not be possible to limit the temperature rise to within 2 degrees Celsius or 1.5 degrees Celsius.

The situation surrounding global warming is severe, requiring countries to take greater measures than ever before. Ambitious reduction targets and specific actions are required. At COP26, attitudes toward these will be tested.

Additionally, the Paris Agreement established "market mechanisms." However, no consensus could be reached about such mechanisms during the following COP24 and COP25. These will be discussed with the aim of adoption by COP26. "Market mechanisms" refers to "emissions trading" for greenhouse gases. In other words, this mechanism lets one's own country appropriate the emissions reduction work conducted by other countries as a part of one's own country's reduction. Although a general framework has already been agreed upon, some issues were left that will be picked up at COP26. All eyes will be on whether or not an agreement can be created that overcomes conflict between countries.

There will likely also be great debate on financial support known as the "climate fund". At COP15, held in Copenhagen, Denmark, in 2009, the developed countries committed to providing 100 billion US dollars annually in financial support to emerging nations by 2020. Currently, this is set to continue until 2025. At issue is what will happen with regard to a new climate fund after 2025.

The next 10 years are said to be a critical time for countermeasures against global warming and climate change. COP26 will be the starting point for this. An unprecedented large-scale trend is emerging to reduce greenhouse gas emissions and, to the maximum extent possible, halt climate change.

Without a doubt, further initiatives will be required by those in the corporate world. We are approaching a turning point at which actions by nations, corporations, and individuals will connect directly to the future of our planet.