Including the Voices of Young People in Measures Against Climate Change: The Wishes of A Young Person Participating in COP26

Including the Voices of Young People in Measures Against Climate Change: The Wishes of A Young Person Participating in COP26 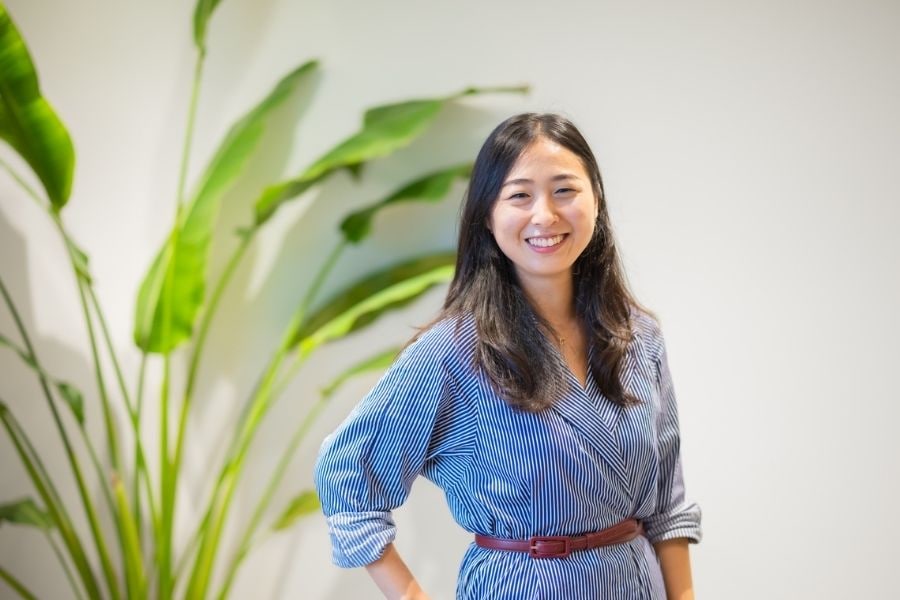 The United Nations Framework Convention on Climate Change (UNFCCC) will hold the 26th Conference of Parties (COP26) in November 2021. Originally scheduled for the previous year, the summit was postponed for a year due to the spread of COVID-19. That being the case, the idea came about for holding a separate conference. Thus, young people from around the world got together and held an online event called "Mock COP26" in November 2020.

In the mock event, over 300 young people selected from 140 countries discussed six priority themes regarding climate change and declared their proposals for the world. We asked Ms. Saza, who at 26 is part of the event's operations team, about what led to the holding of Mock COP26 and her expectations for the actual COP26.

An interest since childhood: Environmental issues Ms. Saza sitting down with us for an interview (Photo:Takuma Imamura)

Ms. Saza's interest in environmental issues began while living in Fukuoka and going to junior high school. Despite the abundance of nature in the surrounding areas, she says that she wondered about the lack of spaces where one could harmonize with nature, as the parks had mostly artificial playground equipment.

Then, she saw Mononokehime ("Princess Mononoke"), an anime movie by director Hayao Miyazaki, and was strongly moved. Ms. Saza was deeply impressed when the main character, Ashitaka, posited the question: "Isn't there a way for the forest and people to live together without conflict?"

As Ms. Saza reflects, "This is what led to me having an interest in nature and climate change. Also, having gone to an international school with students from diverse backgrounds played a role in my decision to study the environmental issue at a university abroad."

After graduating from high school, she entered Canada's University of British Columbia, where she majored in Human Geography. She learned that environmental issues lie behind various phenomenon occurring throughout the world.

She said that "While I considered joining some kind of international organization after graduating from university, I found out that studies at the graduate school level would be necessary to deepen my knowledge about achieving a sustainable society, so I decided to go to the University College London, which has a history in the field of sustainable development education.

Currently, she is studying with 50 other classmates from 48 countries. She says that "They are all studious and have high ideals. With them, I've seen for myself that, as long as you have common goals, mutual cooperation is possible despite different cultural backgrounds." Differences in environmental awareness between the West and Japan

After she traveled to England in 2019 and started research at graduate school, the COVID-19 pandemic erupted. In July 2020, she inevitably had to temporarily return to Japan. This was followed by disappointment in learning that COP26, which she had been looking forward to due to the event being held in England, had been postponed.

At least she could pursue activities in Japan aimed at a sustainable society, she had thought, but when she talked with friends working in the corporate world of Japan, she made a surprising discovery about the differences in environmental awareness between Western countries and Japan. They told her that their companies were already working on sustainable development goals (SDGs), so they were doing their part via various environmental measures.

But, said Ms. Saza, "SDGs are only one part of environmental measures and are not by any means sufficient to stop climate change. I felt a sense of crisis in that the majority of Japanese are not aware of the seriousness of the climate change that is happening now."

This experience strengthened Ms. Saza's conviction that it would be necessary for the younger generation to take action. Invited by friends in the London-based International Students’ Association, she became a core member of Mock COP26. Held from November 19 to December 1, 2020, Mock COP26 was attended by 330 people from 140 countries around the world, and it drew enough attention to be reported on by major international media outlets such as CNN and the BBC.

Ms. Saza said that "Even though we had only four months to prepare, the Mock COP26 website received 2,400,000 views during the event, and media outlets from around the world published over 250 articles about it."

Such a large response was unexpected. Ms. Saza attributed it to that fact that 72% of the participants were from the southern hemisphere, the average age was 22, and minorities were given consideration.

She believes that having influential "adults" participate was also a factor in Mock COP26's success.

"Although the event was oriented toward young people, we needed to have adults participate as well in order to spread the movement throughout society. We therefore called on internationally influential people in environmental fields to participate."

This resulted in participation by global experts on the environmental issue, including England's MP Alok Sharma, who is the president of COP 26, and representatives from Italy's environmental ministry and the UN Secretary-General's Envoy on Youth.

The importance of sustainability education

A video about Mock COP26

Mock COP26 proposed policies for putting the brakes on climate change. Hundreds of ideas were narrowed down to 18, with particular focus on sustainable education and reflecting the opinions of young people.

Ms. Saza said: "I believe that climate change should be made part of compulsory education and that studying the relationship between nature and humans from childhood is important preparation for the future."

There is also a need to create a resolution process that reflects the opinions of young people in climate change measures.

"The voices of young people tend to be restricted," she explained. "Our valuable proposals tend to be dismissed without any debate or dialogue. I want to improve this situation and change society into one that can realize the ideas of the young people that will be responsible for the next generation."

Currently, Ms. Saza is active as a member of the Mock COP26 operations team. She is one of eight selected from global participants. Her job is to provide guidance for volunteers, meet with national representatives, and support policy proposals.

During COP26, in Scotland, Ms. Saza and her fellow members will hold the Education Summit. Its theme will be "sustainable education." Education ministers from around the world will gather to discuss making climate change education mandatory. Elaborating, she said:

"As the average temperature of the Earth continues to rise, these past few years in Japan have experienced unprecedented disasters, from heavy rains and damage to crops from abnormal weather. Unless the 1.5°C target of the Paris Agreement is achieved, low-elevation regions risk being submerged. Unless we immediately embark on action to stop climate change, the human race will sustain considerable damage. For precisely this reason, environmental education is of the utmost urgency."

COP26 expectations and the future A year has passed since the holding of Mock COP26 by the young people involved. Ms. Saza, who will fly to Glasgow, Scotland to participate in COP26, effused that she is "looking forward to expanding international alliances."

Young people standing up to find solutions to the problem of climate change—their future activities will be in the spotlight.

Born in 1995. Graduated from Canada's University of British Columbia. Currently enrolled in the Sustainable Development Course at the University College London. Serving as part of the operations team for Mock COP26, an event created by young people from around the world concerned about the postponement of 2020's COP26 summit. Currently in charge of negotiating between Mock COP26 operations and the executive secretariat of the COP26 summit (scheduled to be held in November). In January 2021, established SWiTCH, which is a general incorporated association that, with adults supporting young people, is working toward creating a recycling society.