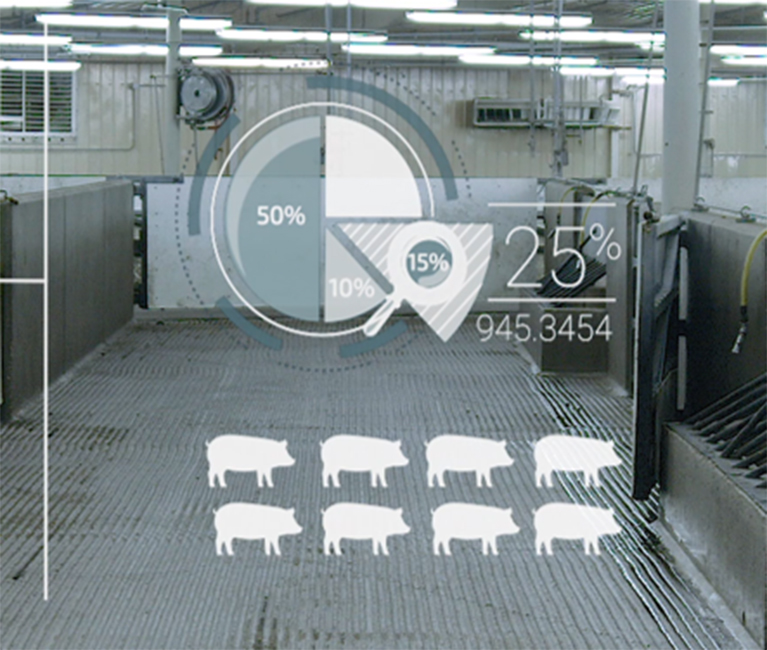 In Partnership with Bloomberg Media Group

Where the Internet of Things Is Already a Reality

This is a story about how the sausages—and the baby back ribs and the smoked cocktail wieners—get made.

When consultants talk about the Internet of Things, they generally describe spotless factories run by armies of robots, and driverless cars cruising sleek cities of the future. Those predictions may one day come to pass. But in the meantime, the Internet of Things is in full effect in a vast pork processing facility an hour’s drive north of the North Dakota state line.

Brandon, Manitoba, population 48,859, is among Canada’s fastest-growing cities. Its largest private employer is Maple Leaf Foods, where 1,900 employees shepherd 15,000 pigs a day through a plant the size of a dozen football fields. In March 2019, Maple Leaf engaged Hitachi Vantara, a digital consulting company, to make its operations more efficient and also more sustainable for the company and the environment.

“Because the technology space is so volatile, we needed competencies that we didn’t have in an area that was new to us,” says Dan Di Salvo, Vice President of Infrastructure and Security Services at Maple Leaf. The company’s goals included reducing energy usage, cutting its carbon footprint and providing a better environment for the animals, he says.

Hitachi has developed a specialty in helping companies promote Social Innovation – what the consulting firm calls powering good. It aims to advance social and environmental values, in addition to the improving economic values embodied by all growing companies. In manufacturing, Social Innovation often turns on how enterprises can apply the Internet of Things in the form of sensors that collect and analyze vast amounts of data in the service of improving the manufacturing process.

Early in the process of working with Maple Leaf, Hitachi held a three-day meeting at a local hotel for managers to describe various aspects of the production process that could be improved. The workers even sketched out what the screens of the app Hitachi was creating could look like.

“And then Hitachi played it back to them. ‘Is this what you meant? Is this what you think it needs to look like? Did we miss anything?’” Di Salvo recalls. “Having them as part of developing that user experience was crucial to its design, as well as to encouraging its adoption.”

Managers said they had to walk around the facility in order to monitor what was happening. What they wanted was data available at their fingertips, generated by a variety of sensors throughout the facility. With that achieved, “you're no longer walking around to find a problem. You're walking around to solve a problem,” Di Salvo says. 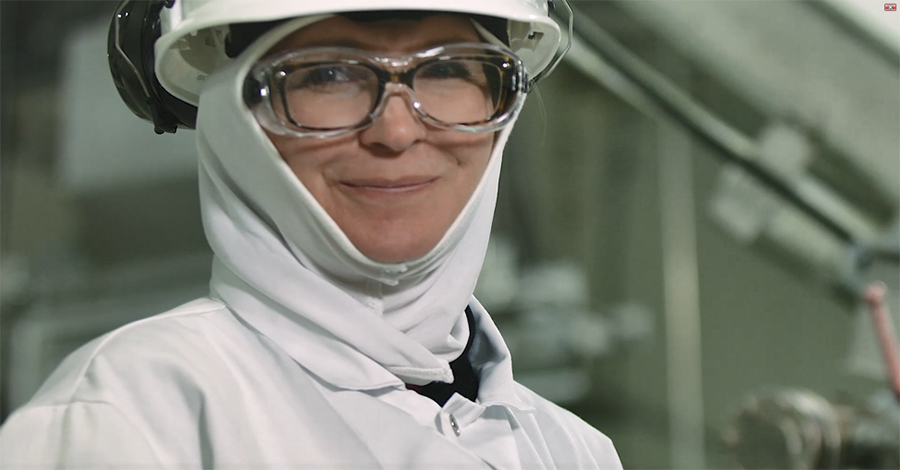 The changes start at the beginning, as hogs walk off trucks from the farms where they are raised. Employees used to record on paper how many hogs arrived and which pens they were herded into. Now, with bar codes and an app that runs on iPads, they digitally record the number of hogs in each pen and when they arrived. That helps employees know when to provide the hogs with water and, if they remain in the facility long enough, food.

“We know how their journey will end,” Di Salvo says, “but while they’re in our care, we have a responsibility to make sure they’re being treated respectfully.”

Once the hogs are dispatched, Hitachi sensors track the movement of the carcasses. Probes, reporting back to the app, ensure the animals are chilled to 4 degrees Celsius (about 39 degrees Fahrenheit) before being cut. When the cutting process begins, lasers help employees properly align the carcasses to automated saws. Hitachi installed cameras that record how well employees are lining up the animals.

Sensors record whether the water that knives are dipped in is hot enough to sanitize them. Sensors determine the weight of the meat in various bins. Supervisors can compare that to expected weights, and address problems that couldn’t be identified until the following day. 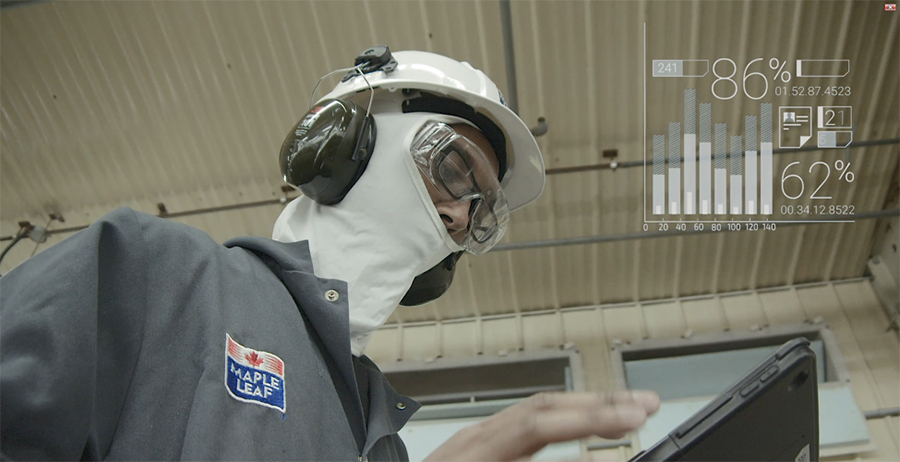 The project was a learning experience for Hitachi as well as Maple Leaf. “From our standpoint, the environment is certainly unique,” says David McKnight, Director of Smart Manufacturing Solutions at Hitachi Vantara. “A meat processing plant is considerably different from, say, an automotive parts manufacturer.”

The plant’s sensors had to be waterproof and free of paint, which could flake off and get into the food stream. The location of the sensors was also important. “Pigs like to eat things,” McKnight says ruefully.

By improving the facility’s efficiency, Maple Leaf continues to support its energy consumption, contributing to the company as a whole becoming the first major food company to become carbon neutral. “We’ve shown that sustainability and delicious sausages can go hand-in-hand,” says Di Salvo.

Learn how Maple Leaf Foods is growing sustainable protein production to raise the Good in Food.

A Simple Solution for Complex ProblemsPrevious

Smart Manufacturing in the Age of COVID-19Next