Coexisting with wildlife while mitigating their negative impact—
IoT provides solutions to the limits of control measures carried out by human.

Damage to crops caused by wild boars, deer, and other wildlife has become a serious issue nationwide in Japan. To coexist with such wildlife in the face of recent and ongoing increases in their populations, proper capture-based management and strategies for preventing their negative impact on our lives are essential. And yet, conventional control measures carried out by human have inherent limitations. To address this, in November 2017, the city of Goto, in Nagasaki Prefecture, put into practice a wildlife damage control system that utilizes IoT, making it an example of the benefits accomplished via the application of digital technologies toward solving regional community issues.

Damage to crops by wildlife: Becoming a serious issue throughout Japan 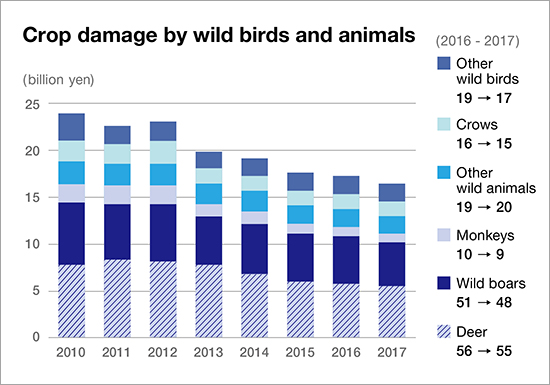 Fukue Island, located at the southeast end of the Goto Islands

In Japan, from 1978 to 2014, sika deer rangeland expanded by about 2.5 times, while wild boar rangeland expanded by about 1.7 times. As reported in surveys by the Ministry of Agriculture, Forestry and Fisheries, the Ministry of the Environment, and others, these wild animals have been causing severe crop damage exceeding 15 billion yen for the entire country annually.

In addition, as the agricultural population ages, worries about how to prevent wildlife from ravaging fields have become a reason for quitting farming. Farmland that was once cultivated but now stands abandoned turns into a new form of habitat for wildlife. Proliferating, such wildlife eventually invades urban areas where they become a nuisance to residential environments as they collide with urban populations, resulting in vehicular damage, personal injury, and other negative impacts.

In June 2018, Fukue Island, where 90% of the population of Nagasaki Prefecture's Goto City—located in the southwest part of the Goto Islands—is concentrated, was certified as part of the “Hidden Christian Sites in the Nagasaki and Amakusa Region” inscribed in UNESCO's World Heritage List. Although surrounded by beautiful seas and blessed with abundant greenery, Fukue Island was also troubled with wildlife damage.

In 2008, wild boar breeding on Fukue Island started to expand their habitat and developed into a perpetrator of crop damage. Invading downtown areas, they have been involved in collisions with cars and motorcycles and have been responsible for other property damage. The island currently has about 100 hunters that possess licenses for capture, but they are getting older. To cope with this situation, Goto City has been executing measures over the years for wildlife damage control, but due to limitations inherent to conventional methods, the city to seek a new solution. Cage trap set up in the mountains

Wildlife damage control product and GIS are integrated so as to provide the centralized management of control status.

Until now, Goto City has employed electric and wire mesh fences as well as cage traps and enclosure traps in their wildlife damage control efforts. Particular focus was placed on cage traps, with about 150 having been set up throughout Fukue Island. As of August 2018, However, despite regular, daily patrols 365 days a year, someone had to travel to trap locations to check if boars had been caught or not, and keeping track of capture status in real time is difficult. Patrolling cage traps set up in the mountains is also strenuous work.

A number of sensor cameras were also set up throughout the mountainous areas to investigate wild boar habits. However, to view image data, someone still has to make regular visits to camera locations to retrieve SD cards.

This situation required a breakthrough; thus, Goto City made an application to the FY 2016 Supplementary Budget ICT Town, People, & Job Creation Promotion Project headed up by the Ministry of Internal Affairs and Communications. Subsequent project assistance then precipitated into a new wildlife damage control strategy comprising a combination of IoT sensors and geographic information systems (GIS) provided by NTT West and Hitachi.

The newly configured system uses IoT sensors placed in wildlife survey and capture zones so as to detect and provide notification of the status of wildlife intrusions and captures in real time while visualizing this status on maps. Introduced in November 2017, the system initially involved the placement of 10 activity sensors and 10 trap sensors in the northeast part of Fukue Island—the location of the greatest damage by wild boars.

Activity sensors automatically initiate photographic imaging when intrusions by wild boar or other wildlife are detected, simultaneously sending the images by email to members of the capture team registered previously on the system. This allows the team members to track field status in nearly real time. Trap sensors, however, work by sending emails to capture team members immediately upon the activation of a trap, thus significantly reducing the labor associated with checking whether or not a trap has caught something. Visualization of capture and observation information; allows for the visual analysis of intrusion trends and damage status trends 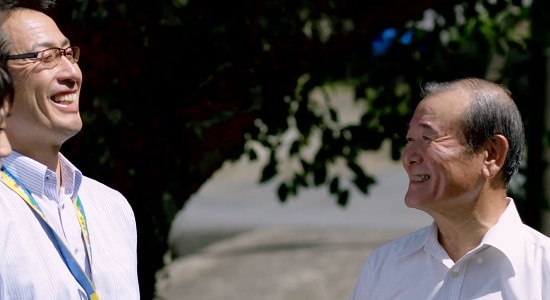 The Hitachi GIS also brings together the information detected by the activity sensors and trap sensors for visualization on a map, making it possible to look at a monitor and ascertain in detail when and where wild boar are active.
The addition of digital technologies to the experience and intuition of regular hunters enabled the city to vastly improve the capture rate, increasing by 5 times the number of boars caught over the previous year. Urban residents have also reported an apparent decrease in wild boar intrusion frequencies in areas where devices have been installed.

Mr. Fujihara of the Goto City Animal Husbandry and Wildlife Control Team, says "I believe that the application of IoT to wildlife damage control has given hope to regional governments concerned about the fall in number of hunters and how to increase capture efficiency."

In response to such results, Hitachi will deploy to the cloud the “Wildlife Damage Control Support Service”, which will display wildlife intrusion and capture status via a map and provide functions for analysis and visualization. In this way, Hitachi will continue to configure systems that will be easy for regional governments nationwide to use.

Application of digital technologies: Leading to solutions for regional issues

Through collaborative creation, Goto City, NTT WEST, and Hitachi have demonstrated the effectiveness of a system that uses sensor data to display the intrusion and capture status of wildlife on a map. A visualization scheme that integrates IoT and GIS in this way has inspired ideas for application in other areas, including the detection of the illegal dumping of garbage, checking of irrigation water, and crime prevention.

By combining digital technologies with human expertise, Hitachi will forge onward with providing services that will contribute to solutions for regional issues.