As the urgency of realizing a decarbonized economy increases, so does the importance of electric vehicles (EVs), as they do not emit carbon dioxide when in motion. Therefore, Hitachi, Ltd. and Hitachi Astemo, Ltd. are committed to the expansion of EVs, having jointly announced the development of an in-wheel motor for EVs on September 30, 2021.

Hitachi adopted the “direct-drive system,” a drive mechanism for EVs in which the torque of the electric “in-wheel” motor installed inside an EV’s wheel is directly transmitted to the wheel.

Features of the new technology

Akeshi Takahashi, head of the development team at the Center for Technology Innovation of Hitachi, explained that this technology was developed based on three concepts.

“The first concept is a compact and lightweight form, the second is compact integration, and the third is energy conservation.”

The prototype combines a compact, lightweight motor with an inverter and a brake, making in-wheel installation possible, thus achieving a world-class power density of 2.5 kW/kg.

Development of the in-wheel motor was set in motion as a result of a comment by a Research & Development Group executive, who stated, “Rather than thinking about building on existing technologies, anticipate the needs of society ten years from now when creating a development goal.”

The development team took this to heart and discussed it at length.

Takahashi explained, “Envisaging ten years into the future and calculating backwards made us create concepts from the perspective of what we wanted for the future rather than what we could do now. Therefore, we anticipated a car with a comfortable cabin. Our focus was having an in-wheel motor, which would leave more room for cabin space, eliminating charging time loss, and enabling the vehicle to be driven in comfort over long distances.”

EVs with in-wheel technology have major benefits. Installing the motor inside the wheel eliminates the drivetrain, enabling the cabin to be enlarged. The realization of vehicles with ultra-low floors provides flexibility regarding battery installation and capacity, which is necessary for an EV. Furthermore, independent wheel control is theoretically possible, which can lead to improved driving performance.

By taking advantage of the full potential of the motor drive, the in-wheel motor can improve vehicle performance and efficiency. As this technology is expected to contribute to the proliferation of EVs, research and development have been progressing worldwide.

However, there are challenges to commercializing the technology that had to be overcome, such as the difficulty in designing a high-performance motor small enough to fit inside the limited space of a wheel and integrating the power unit into the wheel, which increases the unsprung weight from the end of the vehicle’s suspension and compromises ride comfort.

Experimental vehicles have been produced that achieve tremendous speed and an innovative layout via in-wheel technology; however, the lack of a developed commercial vehicle indicates the difficulty of the challenges. The development policy of this technology consists of bold ideas for breaking through these challenges, which reflects how difficult development has been.

However, Takahashi and his colleagues continue to tackle these challenges. Takahashi declared with conviction, “If we can commercialize the in-wheel motor, it can be used in large-goods vehicles, driverless taxis, and the like, so it is an important step in the evolution of mobility.”

He continued, “The key to improving power density was a magnetic array called the ‘Halbach array.’” Rotating the orientation of the magnets used in the motor by 90 degrees generated a strong magnetic force in a certain direction. Although this technique has been used in small motors used in vacuum cleaners and other devices, it was the first time it was applied to a large motor, so a lot of trial and error was involved.”

Additionally, the coil used in the motor adopts a flat coil with a special shape that improves coil density and miniaturizes capacity. There were more than ten brainstorming sessions before the flat coil shape was decided on. 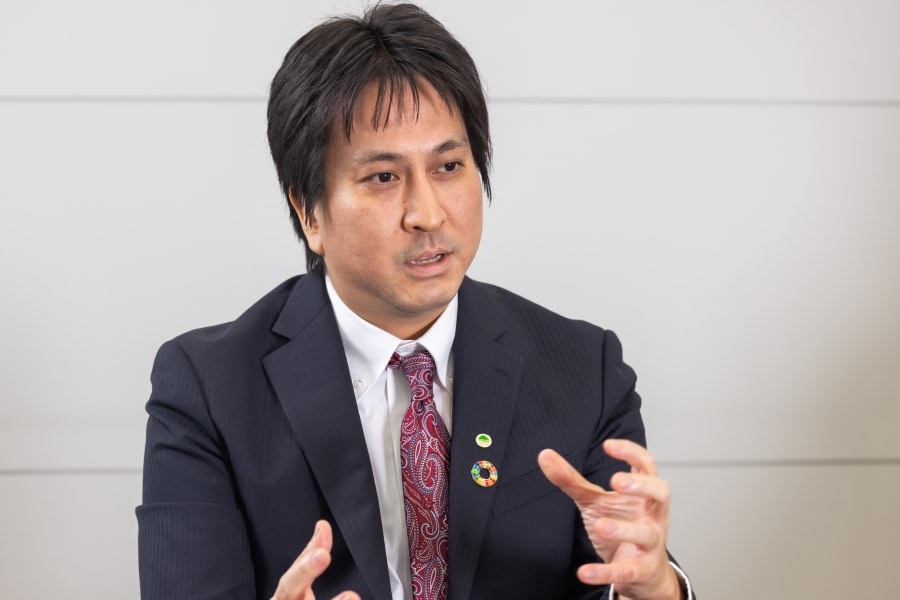 Takeshi Tokuyama, who was in charge of developing the inverter (photo: Takuma Imamura)

The design for the electric circuit inverter that controls the motor is also an unprecedented innovation.

Conventional in-wheel motors for inverters are commonly placed on the vehicle, but this technology integrates the inverter and the motor. Takeshi Tokuyama, developer in the Center for Technology Innovation of Hitachi, talked about the hardships they faced in realizing this innovation.

The difficult decision of the ratio of space between the inverter and the motor inside the wheel was made after copious discussion. Looking back, Tokuyama said, “The people in charge of their respective parts discussed their issues and requests in depth to further mutual understanding, which was critical to resolving the issues.”

Verifications and improvements such as ensuring reliability and accomplishing mass production are still required to commercialize this technology, but Takahashi points out that the future of mobility can be significantly changed if commercialization can be realized, saying, “Because there is no drivetrain, the cabin size can be increased. Therefore, with this in conjunction with the arrival of the automated driving era, I believe we can help realize a more comfortable cabin.”

This technology is a huge step forward in the commercialization of the in-wheel motor, with the expectation that this will generate further momentum in the proliferation of EVs.