The 3D LiDAR (TOF) Motion Sensor is helping to provide a safer environment, with uses both in the home and in commercial locations. TOF is an acronym for Time of Flight, which alludes to how the sensor works. Laser diodes inside the small unit release a beam of near infrared (NIR) light, which is invisible to humans. The beam reflects off surrounding objects and people and is picked up again by an extremely accurate CCD (charge-coupled device) sensor. The 3D LiDAR (TOF) Motion Sensor then works out the time it takes the beam to return. This process allows the near infrared sensors to calculate the size, shape and position of people and objects. By repeating this process many times a second, it can also track movement. So far, this may sound similar to RADAR, but while RADAR can depict moving objects as a dot, the TOF sensors can track multiple objects at the same with great accuracy, and produce a 3D image of the space around it. This exciting development can be utilised in a variety of scenarios.

Already, the 3D LiDAR (TOF) Motion Sensors have found a home in the retail industry. By tracking the size and the shape of shoppers, the TOF Sensor can detect when products are being shoplifted. Due to the subtle nature of the sensor, would-be criminals will not even notice they are being caught red-handed.

Furthermore, unlike traditional cameras that use visible light to capture details such as colours and facial features, the TOF sensors record only the outline of people and objects. This means they can be used in sensitive environments such as toilets and changing rooms, providing an extra level of security without impinging on people’s privacy.

As well as keeping shops more secure, the TOF sensors can also help them to be more efficient. By locating sensors in strategic positions, retail stores owners can monitor flow of shoppers, allocating more staff to busier times and fewer to quieter times. They can see which shelves get the most attention and reposition their stock accordingly, and they can even monitor hand movements to see which items have been picked up, examined and rejected and which have been added to baskets.

The 3D LiDAR (TOF) Motion Sensor can also be utilised by individuals concerned about the wellbeing of vulnerable family members. By placing sensors in the relative’s home it will monitor their posture and movements and understand their routines. If something happens which is out of sync with their normal routine or if they fall or otherwise hurt themselves, the next of kin can be alerted straight away. This gives independence and privacy to the family member and peace of mind to those concerned.

As you read this, new uses for these remarkable sensors are being devised and developed in order to make our society safer and more human-friendly. We look forward the seeing the next novel application. 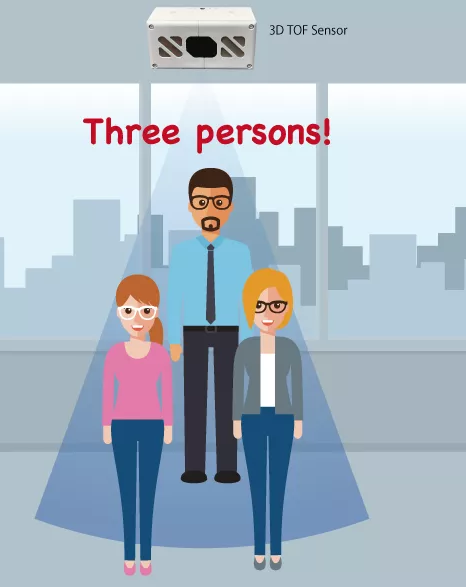