Is your next co-worker a robot?

We’re still a few years away from having robots at our beck and call, but artificial intelligence has already had a profound impact in the workplace.

We’re still a few years away from having robots at our beck and call, but Artificial Intelligence has already had a profound impact in the workplace.

While some critics fear the end for people’s jobs, the actual implementation has proved that, when working together, humans and robots can produce extremely efficient and positive results.

In fact, by using AI for repetitive and laborious tasks, there is opportunity for an environment where humans are able to upskill and focus on more creative and strategic decisions.

From workflow management tools to trend predictions and the way brands purchase advertising, AI is changing the way we do business. The Japanese venture capital firm Deep Knowledge even nominated an AI board member for its ability to predict market trends faster than humans. The possibilities for when humans and AI work together are far more exciting than any new software.

Big data is a goldmine for businesses, and it has been a primary driver for AI advancements, as machine-learning technologies can collect and organise massive amounts of information to make predictions and insights that are far beyond the capabilities of manual processing. Not only does it increase organisational efficiency, but it dramatically reduces the likelihood that a critical mistake will be made. AI can detect irregular patterns, such as spam filtering or payment fraud, and alert businesses in real time about suspicious activities.

But don’t expect a machine takeover any time soon. As easy as it is for machine-learning technology to self-improve, what it lacks is intuition. There is a gut instinct that can’t be replicated via algorithms, making humans an important piece of the puzzle. The best way forward is for humans and machines to live harmoniously, leaning on one another’s strengths. Advertising is a perfect example as businesses can spend hours labouring over data and costs to implement their strategy, but machines are now doing much of the analysis, allowing advertisers to upskill and focus on creating more engaging content. 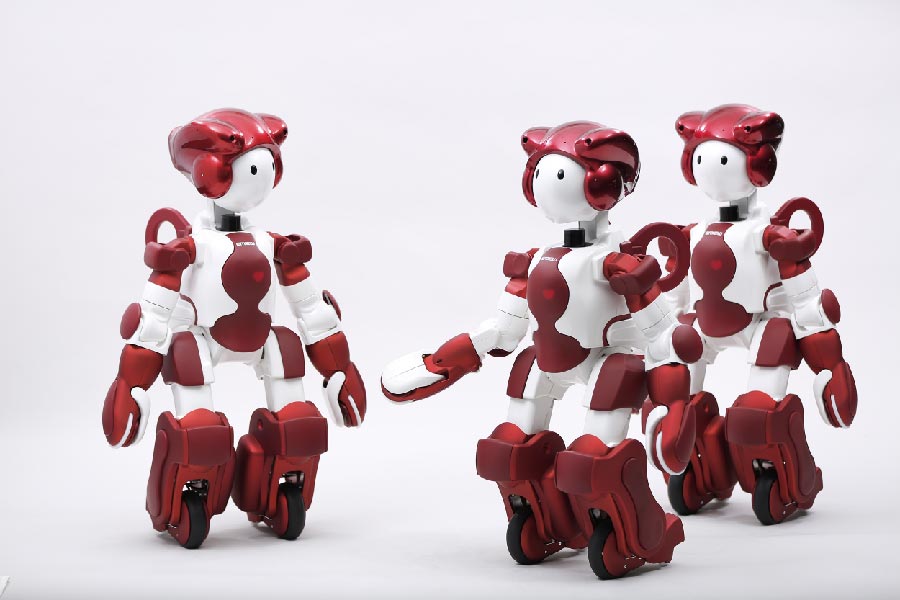 Warehouse robots regularly come up as a topic in the media, particularly at Christmas time, as it is widely believed that the repetitive, labour intensive work is a process that will soon be performed by robots. Yet this is actually as a task that has tended to be better performed by humans, as the automated sensors robots use to identify items can be confused by packaging and, while workers often conduct tasks according to a computer’s orders, they also come up with new problem-solving ideas.

However, with Hitachi’s latest robot, the AI automatically learns from human workers, analysing the outcomes of the approaches they take and re-using the best ones. For example, unlike the heavy-lifting robots used in various warehouses, Hitachi’s computer can adapt to changes such as shift patterns and the weather. It does this by analysing data similar to the actual work conditions of the day from past big data on work detail, work volume and weather to provide useful instructions to cope. This allows the business to learn from previous experience, and the recommendations made by AI can then be implemented by humans leading to an opportunity to upskill and improve operations. Productivity in one of Hitachi’s warehouses has risen by eight per cent thanks to the AI system and hopes to expand its ‘human and AI cooperation’.

These examples all prove that there is no longer the question of whether robots OR humans will carry out tasks, but rather highlight the vast potential when they work together. When number-crunching and labour-intensive tasks are aided by machines, it makes way for a much more efficient, productive work place, which then makes more time for creativity and innovation in the workplace.