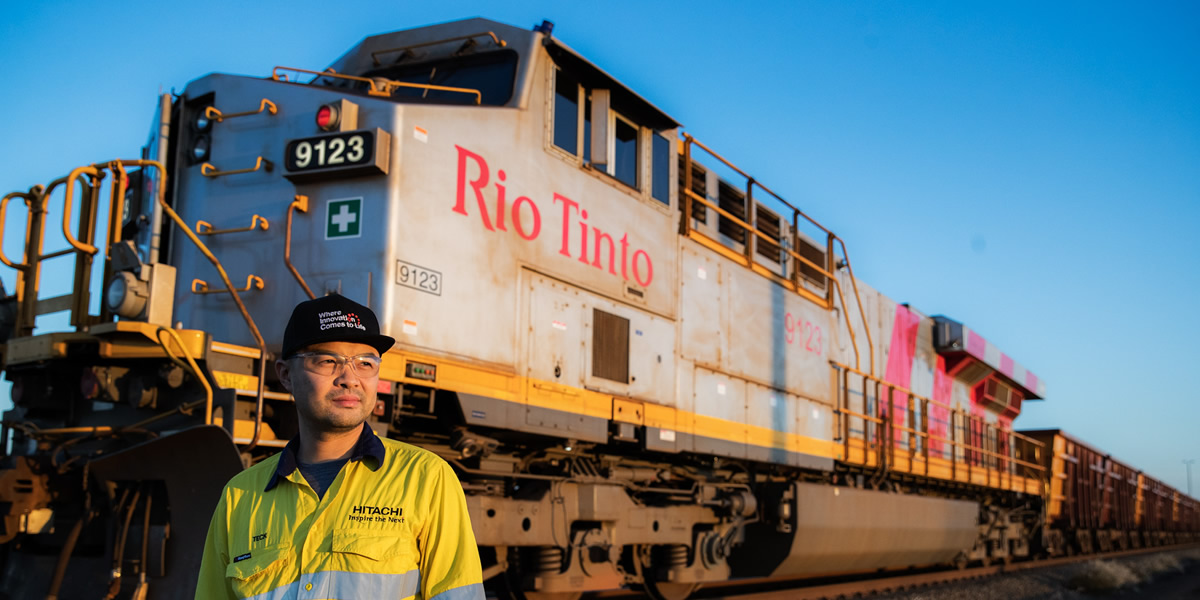 The ability to safely and efficiently transport minerals – like iron ore – is integral to the wealth and prosperity of many Australian towns, and essential to the growth and development of emerging global economies. AutoHaul™ marked a major turning point for heavy freight rail operators globally. The degree of change that driverless metro has had on mass transit operations in the passenger sector has been huge. This offers insight into the potential of autonomous freight rail projects like AutoHaul™ to transform the heavy freight and resources sector of the future.

To date, this astounding technological feat has seen more than 7.5 million train kilometres operated fully autonomously – without the need for an onboard driver – all while increasing safety outcomes.

It’s an inspiring example of how innovative collaboration can revolutionise an industry to deliver a future-first solution in efficiency, safety and economic sustainability.

How can an entire heavy freight rail system be automated to eliminate the need for drivers and improve operational efficiency, safety and economic sustainability?

Rio Tinto operates over 200 locomotives on more than 1,700 kilometres of track, hauling iron ore from 16 mines to four port terminals. The average return distance is around 800 kilometres, with one cycle of loading, transport and unloading from port to mine and back to port taking approximately forty hours to complete. Ivan Vella, Iron Ore’s Managing Director in Rail, Port and Core Services for Rio Tinto expressed the great challenge posed by ‘…automating a rail network of this size and scale in a remote location like the Pilbara. 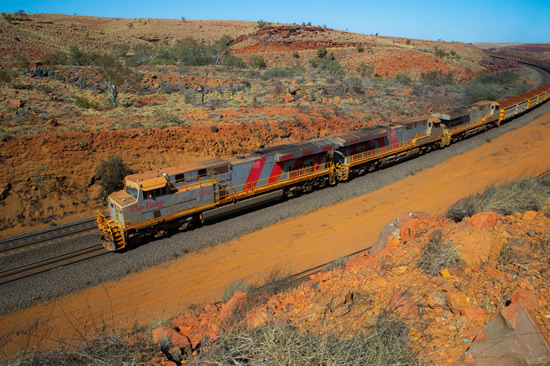 In the past, Rio Tinto’s heavy freight rail operation required drivers to cumulatively travel over 1.5 million kilometres of remote terrain annually to attend their shifts. Now with AutoHaul™, a saving of 20 minutes per changeover has been achieved, delivering an approximate one hour time saving per cycle. The Pilbara region of Western Australia is one of the world’s largest integrated portfolios of iron ore assets, making this time and distance saving a true achievement in efficiency and economic sustainability.

Through a combination of technical ingenuity and a commitment to the immense potential of such a technology, trailblazing the world’s first fully autonomous, heavy haul, long distance rail operation was nothing short of a conquest.

The joint spirit of collaboration between Rio Tinto and Hitachi Rail powered the invention of AutoHaul™ – a pioneering technology set to change heavy haul freight handling into the future.

Dedicated leading specialists from teams spanning Australia, the USA, Italy and France joined forces to develop and deploy this world first system. While this was undoubtedly an innovation in technology, it was a people-first project, with a diverse team of experts cooperating successfully across time and space. Conquering varied time zones, they bridged the distances between them through the spirit of collaboration. 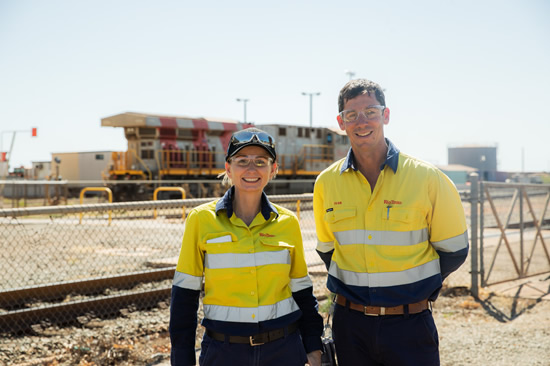 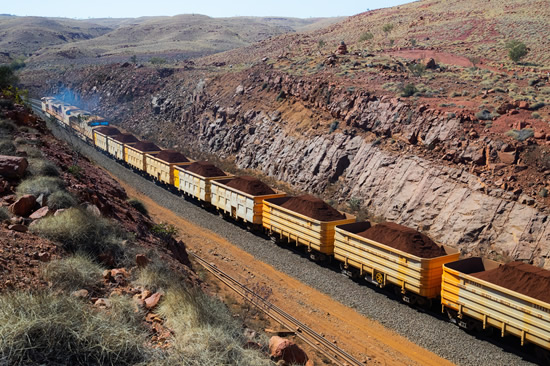 To support a one-team approach across different geographic locations, duplicated laboratories allowed parallel testing to enhance collaboration between teams. This enabled teams to operate continuously, transparently and productively. There was a universal commitment to open communication by all team members to share research findings and information openly, which was a key component of the effective delivery of the AutoHaul™ project.

Before the project could be launched, constant development, testing and trialling was conducted. In 2010, Hitachi Rail signed an agreement with Rio Tinto to provide the complete signalling, communications, train control, supervision and automation system upgrades needed to support fully autonomous operation of the mining rail network; and make AutoHaul™ a reality.

In the case of Rio Tinto’s AutoHaul™, each locomotive was installed with an onboard driver module which generates automatic reports on the exact position, speed and direction of travel of the entire fleet via Internet Protocol (IP) communication to a central control centre in Perth more than 1,500 kilometres away. The Office Control Centres themselves were also upgraded, alongside the replacement of trackside equipment with 60 radio base stations to automatically control and monitor the safe movement of the autonomous trains.

The Automatic Train Operation (ATO) interface software enables fully autonomous locomotive control. Further safety measures include asset protection equipment at level crossings, which run diagnostics to improve safety, while Hi-Rail vehicles (vehicles with special fittings allowing them to move along railway tracks) facilitate location tracking. AutoHaul™ trains are fitted with Automatic Train Protection, including Movement Authorities, which communicate whether the next section of rail line ahead is clear and safe for travel.

Collectively, these upgrades leverage pioneering technology to enhance safety and efficiency measures in ways not previously possible. From sophisticated laser-based obstruction detection systems to vital safety servers in control centres, the highest safety assurance measures were implemented at every touch-point.

Hitachi Rail provided the communications and supervision infrastructure required to deliver the highest safety standards for this ambitious operation, installing more than 60 radio base stations and upgrading over 40 level crossings, including adding CCTV cameras. 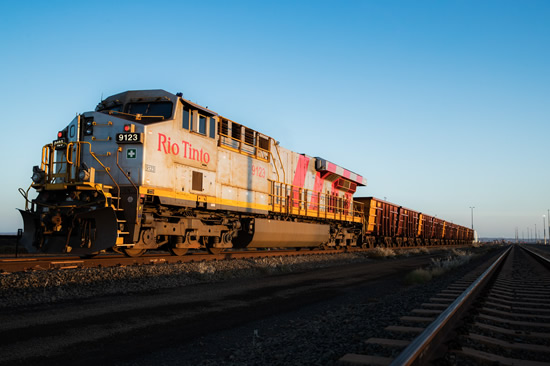 Rio Tinto is thrilled with the project’s success, commending safety improvements like reduced risk at level crossings and automated responses to speed restrictions and alarms.

The first loaded, fully autonomous heavy freight train ran in July 2018, carrying a massive 28,000 tonnes of iron ore over 280 kilometres between the Tom Price Mine and port of Cape Lambert. The communication and supervision infrastructure required for the success of the project adhered to the strictest regulations at every stage of development. AutoHaul™ has been meticulously developed and delivered to the European Committee for Electrotechnical Standardization's (CENELEC) international safety standards and accredited by Australia’s Office of the National Rail Safety Regulator.

Hitachi Rail’s Project Manager Roslyn Stuart is proud to be involved in a project that calls upon the spirit of collaboration. She affirms, ‘One of the true successes of this project is the people. I’m so proud to say the team of people working on the project today is largely the same as the one that started the project back in 2012.’ Together, Hitachi Rail and Rio Tinto continuously work on system improvements.

AutoHaul™ truly is an example of innovation and co-creation, with Rio Tinto and Hitachi Rail collaborating successfully to develop a benchmark in progressive freight rail technology.

Hitachi Rail’s collaborative innovation forms a blueprint in cooperative technological advancement for the rest of the world. 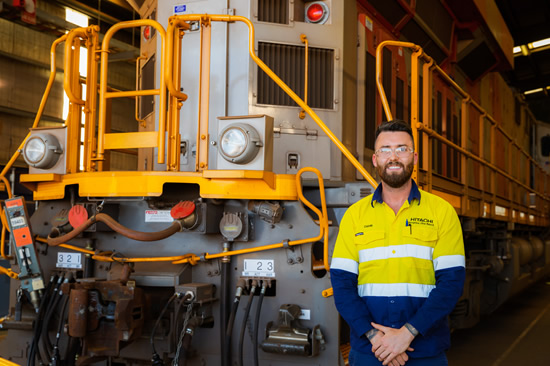 AutoHaul™ can be viewed as the blueprint for how other companies from around Australia and the world could achieve the same automation success on their own railway networks. The pioneering work being undertaken by Hitachi Rail in the field of automation of long distance heavy haul railway is part of the transition to the future.

Michele Fracchiolla, Hitachi Rail President for Freight commented, ‘This is an exciting and challenging time for transportation and infrastructure developers globally. The potential for continuous and fast-paced change will lead to greater integration of systems while the span of autonomous practices will increase.’

Hitachi Rail has recently joined a strategic partnership with Rio Tinto to further enhance the AutoHaul™ system into the future. The possibilities demonstrated through this first collaborative triumph sets the tone for the next exciting phase of freight rail technology.