In 2009 to celebrate the 150th anniversary of the state’s foundation the Queensland Government unveiled a list of 150 Queensland icons, voted on by Queenslanders.

In the category of “Inventions or innovative concepts that Queenslanders have pioneered,” was Queensland Rail’s Tilt Train. Using technology designed, manufactured and delivered by Hitachi, each carriage tilts to enable the trains to go faster round the curves , providing greater comfort for the passengers. 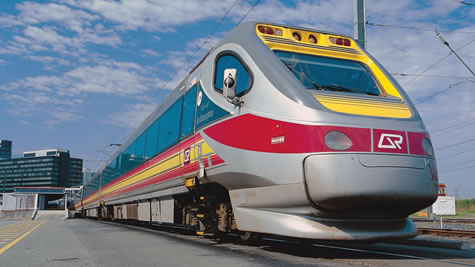 Hitachi’s tilt train technology is key to their performance. When the train heads into a curve at high speed the entire body of each carriage tilts towards the centre of the curve to compensate for the centrifugal force that would otherwise push passengers towards the outside of the curve.

Sounds simple in principle, but it’s very technically challenging to achieve in practice. For example sensors on the track are needed to tell the train its position, and based on the train’s track database it determines that a curve is coming up. The train then uses information about each curve stored in its on-board computer to adjust the timing and amount of tilt precisely so as to ensure maximum passenger comfort.

The rate at which the tilt is applied is also key to passenger comfort at high speed. Hitachi has undertaken extensive research in Japan — where tilt train technology is widely deployed — to determine optimal tilt rates.

Hitachi has overcome all these challenges to deliver safe and reliable tilt trains to Queensland Rail, in Japan and elsewhere.