Weeds are a huge problem for farmers, but so are the herbicides used to eliminate them: it is very difficult to confine their application to the weeds they are meant to kill.

Hitachi is working to enable farmers to eliminate this problem through a combination of image recognition, artificial intelligence, data analytics and satellite positioning with accuracy far superior to that provided by GPS.

It is just one of a number of agricultural applications Hitachi is working on in Australia with local farmers and industry organisations, bringing together components from multiple organisations to provide a satellite guided positioning system. These projects include autonomous harvesting vehicles, autonomous navigation and, potentially, precision weed control.

The accurate positioning is provided by the Japanese Government’s Quasi-Zenith Satellite System (QZSS). The position derived directly from the satellites is monitored at a number of ground stations in Australia whose locations are known with great precision.

These ground stations compute the error in the satellite-derived location and feed correction data back to a centre in Japan where a correction message is computed and fed to all users of the QZSS system. This enables them to determine their position with an accuracy of +/- 2cms horizontally and +/- 8cms vertically, 24 hours a day, seven days a week. 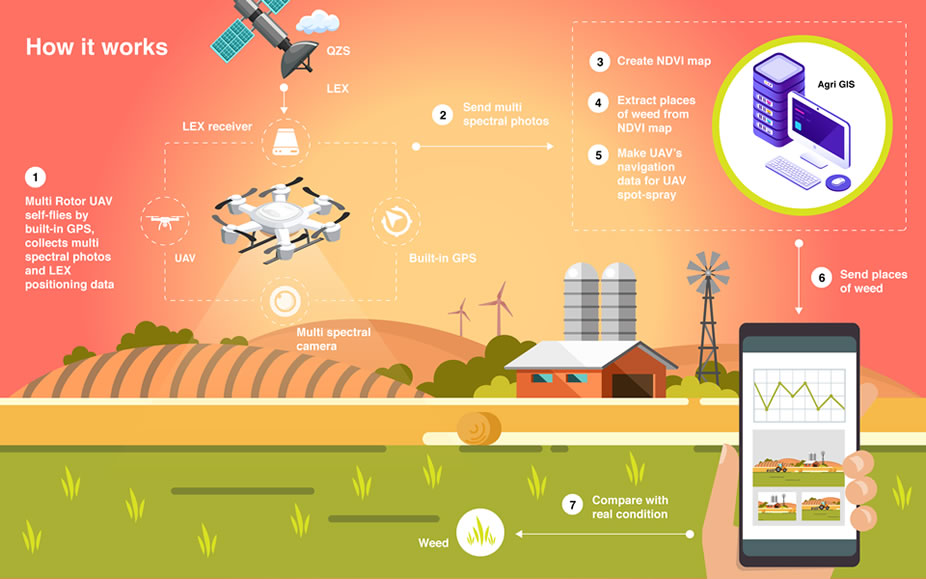 Weed control is a recent project. Hitachi has worked with the Western Australia Department of Primary Industries and Regional Development and the Carnarvon Growers Association, in particular with growers of asparagus and bananas.

An unmanned aerial vehicle (drone) equipped with QZSS navigation and a camera is flown over growing areas to collect imagery of the crops. Analysis of the imagery enables the precise location of weeds to be determined and used for selective application of herbicide.

This will save time and cut spending on herbicide. In the future the process of identifying weeds and applying herbicide will be fully automated.

Hitachi started experimenting with agricultural applications of QZSS in 2014 on crops at Rice Research Australia near Jerilderie in southwest New South Wales and has since expanded these trials to sugar cane fields in Mackay in Queensland, avocado farms in Bundaberg in Queensland and banana farms in Carnarvon in Western Australia.

Hitachi is helping Australian farmers exploit these technologies and guide them toward greater sustainability and resilience.